Having recorded their latest first-of-the-year tornado ever on May 1, Oklahoma joins Texas and Kansas in experiencing a particularly quiet tornado season so far in 2018.

Nearing the season’s traditional half-way point, reports are running only 54% of normal, placing the first half of the US tornado season at roughly the 10th percentile.

JLT Re reports that regional, colder-than-usual weather throughout April is partially responsible for the uncharacteristic quiet. As seen in the map below, despite April typically being one of the most active months, 2018 has seen record low temperatures across many of the central U.S. states. 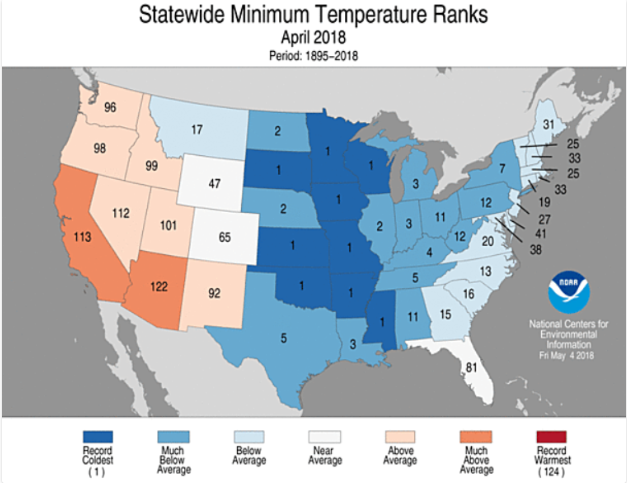 Despite a slow start to tornado season, wind reports have been near average. Yet, JLT Re reports, wind has blown in non-traditional regions, more highly concentrated in the Mid-Atlantic and Northeast and far below average in the Plains and majority of the Midwest. As cold fronts have surged down the Plains into the southern U.S. warmth has then moved into the Eastern Seaboard of the US followed by strong cold fronts.

The wind season develops more slowly than tornadoes and extends well into summer resulting in the US wind season running just a bit behind average at 89% of normal activity. Typically, nearly 80% of the wind season transpires after May 20.

With only 60% of average storm reports through mid-May, hail reports are also running significantly behind normal.

Below average tornado, hail and wind activity is expected to continue into early June. This will be most prominent in the heart of hail/tornado alley in the central and southern Plains while any activity that does transpire will likely be more north and east across the country.

Dr. Victor Gensini of Northern Illinois University, whose ERTAF model looks at the probability of above normal/average/below normal tornado activity in the two to three week forecast, has summarised on his website, saying, “A continued northward shift in the north Pacific jetstream leads us to believe the peak of annual US tornado frequency in the Great Plains will be gravely below average. In fact, the last week of forecast ending May 12 verified at just 9% of average activity, with 6 tornadoes reported while the weekly average is 64 tornadoes.”

The International Underwriting Association (IUA) has announced the establishment of the IUA Cyber Reinsurance Committee, a new group focused on...