Validus Holdings, the Bermudian insurance and reinsurance group has revealed an initial estimated net loss from the October California Wildfires of $30 million. 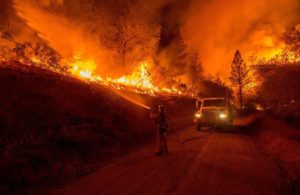 Validus said that it’s estimate is based on an evaluation of loss affected contracts, as well as information provided by customers and intermediaries.

However the company noted that there is uncertainty in the estimate due to the preliminary nature of the information and so the total could be subject to change.

However,  uncertainty remains regarding the extent of losses to vineyards and wineries.

The reinsurer also stated in the same announcement that it doesn’t expect any negative impact from proposed tax reforms in the U.S.

Based on the text of the current U.S. House and Senate tax reform bills, Validus said that it doesn’t expect these changes to U.S. tax law to have a material impact on the company’s operating results.