When ranked by gross premiums written (GPW) in 2020, AXA tops the list of the largest European insurance companies with USD 115.3 billion. The insurer also recorded USD 80 billion of capital & surplus from 2020. 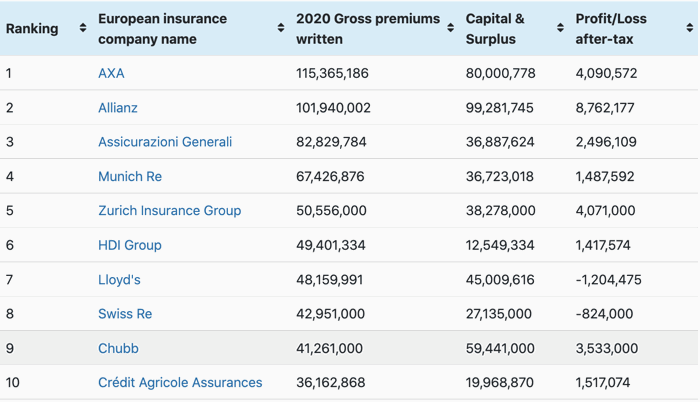 Based on research data from ratings agency AM Best, our directory of Europe’s largest insurance companies also shows that out of the big four European insurers, only Munich Re and Swiss Re managed to make the top ten.

Meanwhile, sitting in second place on the list is Allianz with GPW of USD 101.9 billion. The company also had a massive capital & surplus in 2020 of USD 99.2 billion – the highest on the list.

Sitting one place below Munich Re is Zurich Insurance Group, who recorded USD 50.5 billion of GPW. Close behind in sixth place is HDI Group, with USD 49.4 billion of GPW.

In seventh place on the list is Lloyd’s. The world leading insurance and reinsurance marketplace recorded GPW of USD 48. 1 billion in 2020, along with USD 45 billion of capital & surplus.

In addition, sitting below Swiss Re in ninth place is Chubb, with GPW of USD 41.2 billion. The company also recorded USD 59.4 billion in capital & surplus.

Closing out the top ten is Crédit Agricole Assurances, as the France-based insurer recorded USD 36.1 billion of GPW.

Interestingly, only two insurers recorded over USD 100 billion of GPW, with both AXA & Allianz doing so.