Up to 15,000 structures worth nearly $14 billion at risk from Cali wildfires: RMS 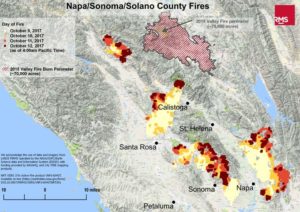 The fires ignited on October 8th and 9th and have since burned over 100,000 acres in Napa, Sonoma, and Solano counties alone, with several additional fires still ongoing throughout California.

Because of the high penetration rate of wildfire coverage in standard residential and non-residential policies, the risk modeller said the economic loss range also represents an estimate of insured losses.

The loss estimate includes property damage, contents and business interruption caused by the burn component of the fires to residential, commercial, and industrial lines of business, but excludes automobile or agricultural crop losses, smoke damage, or any factor for post-loss amplification.

Conditions conducive to fire ignition and spread persist, and have resulted in extreme fire behaviour; after four days of active burning throughout the wine growing regions of Northern California, there are still eight fires threatening both lives and significant amounts of exposure.

At least 13 Napa Valley wineries have been destroyed, and with the full extent of the fires’ impact on the region’s wine industry yet to be felt, RMS noted significant uncertainty for ensuing long-term business interruption, which could push total industry loss figures up higher.

Reports today suggest the wildfires have put billions of dollars of property at risk, with latest estimates suggesting that at least 5,700 structures, largely homes, have been completely destroyed by the fires.

MicroInsurance Centre (MIC) has joined global consulting and actuarial firm, Milliman, in a move to accelerate and expand the firms'...