A wildfire that sprang up on Thursday morning has already engulfed more than 20,000 acres in the Butte County region of northern California, destroying around 2,000 structures in the town of Paradise and threatening a further 15,000. 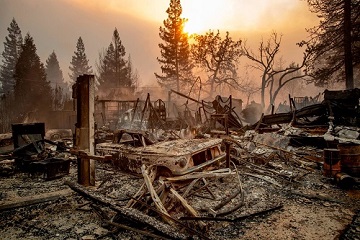 Aftermath of the Camp Wildfire in the town of Paradise, California. Source: Noah Berger/AP

The blaze, which has been dubbed the Camp Wildfire, has developed at an unprecedented pace and continues to burn through an area roughly the size of 80 football fields per minute, with firefighters unable to implement containment efforts due to adverse weather conditions.

Wildfire losses have been particularly significant for the re/insurance industry over the past year and this latest event, which comes at the peak of California’s wildfire season, is expected to drive substantial insured losses.

Officials said that catastrophic damage can be expected as thousands of homes and structures, as well as vehicles, are likely to have been destroyed around the Paradise area, which is home to around 27,000 people.

“Pretty much the community of Paradise is destroyed, it’s that kind of devastation,” said Cal Fire Capt. Scott McLean late on Thursday.

More than 40,000 California residents have been evacuated from the path of the Camp Wildfire, which authorities fear could now spread to the nearby city of Chico, which has a population of around 90,000.

For comparison, July’s Carr Wildfire destroyed around 1,604 structures over an area spanning 229,651 acres in Shasta and Trinity County, California, and cost the re/insurance industry more than $1 billion.

The latest data from the California Department of Forestry and Fire Protection (Cal Fire) said that more than 2,000 fire personnel are currently working to tackle the Camp fire, but continue to be challenged by conditions such low humidity and strong winds.

At the same time, two other sizeable fires have broken out in California’s Ventura County, which have also spread rapidly and threaten thousands more homes and residents.

Cal Fire said the Woolsey Fire has currently burnt through 7,500 acres, with 30,000 people evacuated and 1,000 structures threatened, while the Hill Fire has spread to 10,000 acres and threatens many more.

Insurers and reinsurers will continue to watch the development of the wildfires in Butte and Ventura County closely as containment efforts continue and as the full extent of the destruction emerges.

Allstate Corporation, one of the largest primary insurers in the U.S, is reportedly considering the sale of its fixed-annuities business,...