Dubai’s Torch Tower, which at 1,105ft is one of the tallest residential buildings in the world, has again caught fire, with reports claiming that a fire broke out on the ninth floor and spread to upper levels, although the blaze is now believed to be under control. 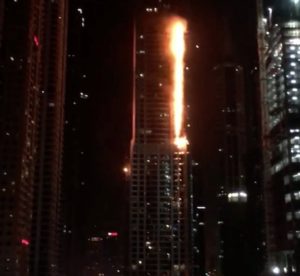 This is the same residential building that caught fire in February 2015, and, for both events, authorities remain uncertain what the cause was.

According to witnesses and industry reports, the fire engulfed up to 40 residences, and some vehicles were reportedly damaged from falling debris, although it is understood that no one has been injured in the fire.

The Dubai Media Office released a statement, that said; “The fire at the Torch Tower has been brought under control. Cooling operations are under way. No injuries have been reported.”

The building is an externally clad residential tower, and earlier this year Dubai passed legislation and fire safety rules that demand buildings with flammable cladding replace it with something more resistant to fires.

After the 2015 fire it was reported how homeowners insurance penetration was relatively low in Dubai, but that the event had driven more inquiries into insurance solutions. Only time will tell how damaging the latest fire will be, and whether lessons from two years ago resulted in an uptake in insurance protection.