The Insurance Council of Australia (ICA) is anticipating a significant increase in insurance claims as policyholders start returning to their homes after a catastrophe was declared in the city of Townsville, Queensland due to torrential rainfall and flooding. 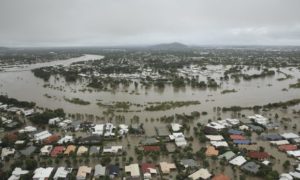 Townsville was hit with more than a metre of rain in just a week, over 20 times the average for the time of year.

With an estimated 20,000 homes at risk, the ICA yesterday declared the the flooding a catastrophe to ensure Townsville policyholders are given priority by insurers.

The dam can release up to 1,900 cubic metres of water a second, and reports say that cars and livestock have been swept away by the inundation.

The ICA says residents forced to leave their properties will return gradually to determine the extent of their property loss and damage and that while current insurance losses are $45 million from 3500 claims, figures will rise as more claims are lodged.

“The ICA wants to allay community confusion and clarify exactly what this situation means to householders in terms of their insurance cover,” said ICA Chief Executive Rob Whelan.

Commercial flood cover has been available for Townsville businesses since 2007 from some insurers. The ICA is concerned that a significant number of Townsville commercial policyholders may have chosen not to purchase flood cover.

“There may be a small percentage of policyholders who have decided to opt-out of flood cover at time of purchase or chose to buy a policy that excludes flood,” said Whelan.

“Those policyholders may need to have their claims tested to determine if their claim meets the standard flood definition.”

“Insurance policies that include flood cover as part of their home and contents insurance will reference this standard definition. Nationally, the majority of home building and contents policies purchased (about 94%) include flood.”

Beazley has announced the launch of a new division that is to be led by Mike Donovan, called Cyber &...