Howden forecasts tempered rates for some areas in 2022

Analysts at Howden are expecting to see “further and accelerated rate tempering in 2022” despite a January 1 renewal period that was largely defined by continued price increases.

The broker says higher rates and improved underwriting margins are likely to continue to attract new capital in 2022, although this is unlikely to be a harbinger for soft market conditions.

It notes that new entrants have failed to have a significant impact on pricing so far as underwriting discipline in the market has prevailed.

But Howden adds that the primary market is nevertheless four years into its latest correction, and there were some signs of decelerating rate increases last year in several business lines.

Looking back over the past five years, the global P&C market’s loss ratio averages 68% and compares favourably to what was recorded during the hard market of 2001-05 (75%), when rate changes were last at such elevated levels. 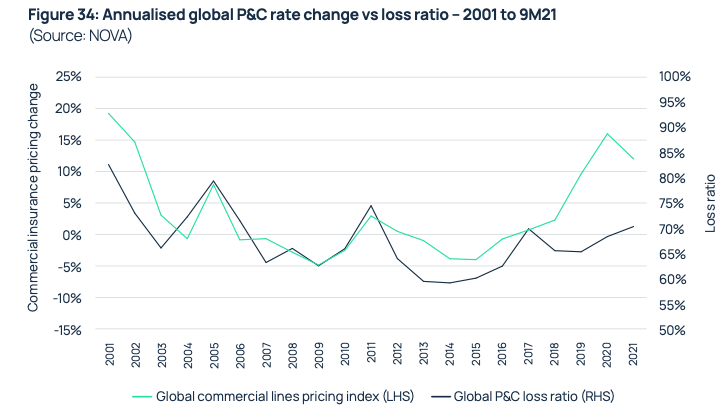 The 2012-16 period stands out as a point of divergence, when abnormally low insured catastrophe losses assisted loss ratios, as does the 2018-21 period, when accelerating pricing has boosted underwriting performance.

Howden observes that underwriting margins continued to improve through much of the mid-to-late 2000s, long after rate changes had turned negative, in large part due to carriers releasing redundant reserves into earnings.

Likewise with carriers today reserving conservatively to account for long-term views of risk, analysts believe favourable loss ratios could be sustained for some time to come, absent any major market shocks.

As a result, Howden maintains some areas of the market are likely to see rate tempering in 2022.

The broker warns that the primary commercial sector, which has seen the bulk of price increases since 2017, is already showing signs of waning rate momentum in most business lines, albeit from a high level and with pockets of rate hardening in challenged classes.

And reinsurance, which has generally lagged, saw mixed outcomes at 1 January, with property exposed segments accelerating and casualty moderating.

“No two cycles are the same, but this market’s ability to differentiate, even during such challenging times, underscores the importance of expert intermediary advice in securing capacity that continues to be deployed cautiously,” said Howden. “Strong relationships have never been more important in helping all stakeholders navigate fast changing market dynamics.”