The Caribbean Catastrophe Risk Insurance Facility (CCRIF) will pay the Bahamas almost US $11 million due to the impact of Hurricane Dorian, which hit the region last week as a Category 5 storm. 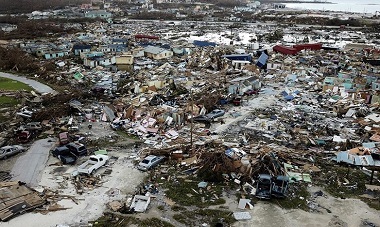 CCRIF has now confirmed that the storm triggered the Bahamas’ tropical cyclone policy for the North West Zone, which includes these two areas.

The Bahamas also has two other CCRIF policies in place, covering the South East and Central sections of the archipelago.

CCRIF typically makes its payouts within 14 days of an event, but in this case the Facility made an advance payment of 50% of the payout to allow the government to begin to address its most pressing needs.

Reports suggest that some areas of the island have been utterly devastated, with the International Red Cross estimating that 45% of the homes on Grand Bahama and the Abacos Islands have been severely damaged or destroyed, representing some 13,000 properties.

At present, estimates from AIR Worldwide indicate that re/insurance industry losses in the Caribbean could be between $1.5 billion and $3 billion, while overall economic losses could be as high as $7 billion, according to Karen Clark & Company (KCC).

Additional support that could be provided by CCRIF will come from the Facility’s corporate social responsibility or technical assistance (TA) programme.

The Bahamas was previously the recipient of a TA grant of $85,000 in 2012 for the construction of a new sea wall following the passage of Hurricane Sandy. Similar sized grants have previously been provided to Jamaica in 2012 and Dominica in 2016.

“Member governments are appreciative of this rapid infusion of quick liquidity through CCRIF payouts from its parametric insurance policies, which they are able to use to address immediate priorities and to support the most vulnerable in their population,” said CCRIF CEO Isaac Anthony.

He continued: “CCRIF and the parametric insurance products that it provides – is an example of a disaster risk financing tool that is most applicable for high impact low frequency events; and the instrument is designed to allow member governments to reduce their budget volatility and to provide some amount of financial resources for emergency relief such as restoring critical infrastructure and providing assistance to the affected population, thereby assisting to reduce post-disaster resource deficits.”

CCRIF can ensure rapid payouts by using parametric insurance policies, which are triggered based on the intensity of an event using a pre-defined metric, such as hurricane wind speed, earthquake intensity, or volume of rainfall, as well as the amount of loss.

Since CCRIF’s inception in 2007, the Facility has made 38 payouts totalling a little over $139 million to 13 of its 21 member governments.

“What we do is really about supporting governments to help their populations – communities, businesses and key sectors such as education, agriculture etc.,” Anthony explained.

“A rough assessment of the beneficiaries of these payouts show that over 2.5 million persons in the Caribbean and Central America have benefitted directly or indirectly from these payouts after a disaster.”