Hurricane Irma insured losses from wind, storm surge and inland flood damage in the U.S. and the Caribbean have been estimated by RMS to reach between $35 and $55 billion. 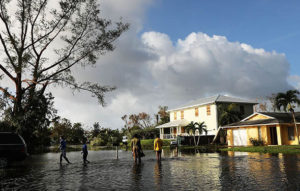 The total economic losses are set at nearly double the insured losses at an estimated $60 – $95 billion.

Uninsured losses from wind and storm surge in the Caribbean are expected to be significant, driving the economic loss figure upwards.

With the Caribbean’s insurance density being significantly lower than that of the U.S., RMS estimates insured Caribbean losses will reach between $10 and $20 billion, with five islands catastrophically impacted and high loss ratio.

The total industry loss estimates include losses to the National Flood Insurance Program (NFIP) of $2.5 to $5.5 billion – this comes in addition to the $7-10 billion estimated from hurricane Harvey two weeks earlier.

Michael Young, RMS head of product management for U.S.climate models, said; “In the U.S., the losses from Irma will be significant and many communities have been severely disrupted.

“But had the hurricane made a direct impact on Tampa, the biggest city on Florida’s west coast, the losses would have been much higher.

“However, while the majority of Irma’s losses will come from Florida, it’s important not to overlook the Caribbean where several islands were devastated.”

RMS said the question of the impact of demand surge from insureds has added to the uncertainty in Florida loss estimations.

Hurricane Irma is the first major hurricane to make landfall in Florida since hurricane Wilma 12 years ago.

Irma struck Caribbean islands with sustained winds estimated by RMS of up to 188 mph – making it
one of the most intense Category 5 storms on the Saffir-Simpson Hurricane Wind Scale ever recorded.

It caused widespread damage when it reached the Florida Keys on September 10th before moving to Marco Island, south of Naples.