The early consensus among analysts is that COVID-19 industry losses will be somewhere in the range of $30 billion to $100 billion, according to Willis Re, the reinsurance broking arm of Willis Towers Watson (WTW).

This rough consensus is broadly consistent with estimates released by WTW earlier this month, which put losses for a ‘moderate’ scenario at $32 billion, and for a ‘severe’ scenario at $80 billion.

So far insurers have booked only $4 billion of COVID-19 losses, with costs varying significantly between individual companies due to the complexity of loss.

Willis Re does not consider the wide range of estimated losses to be surprising, given the differences in product mix between various re/insurers.

But notably, there was also disagreement as to whether the worst hit from the pandemic is yet to come, with some companies recording figures that they do not expect to worsen, and others saying loss activity will be more of a second quarter event.

The key unknown is business interruption cover, and those companies that recognised a BI loss tended to describe it as related to the generally few cases of affirmative cover, or for expenses related to defending the position that losses are not covered. 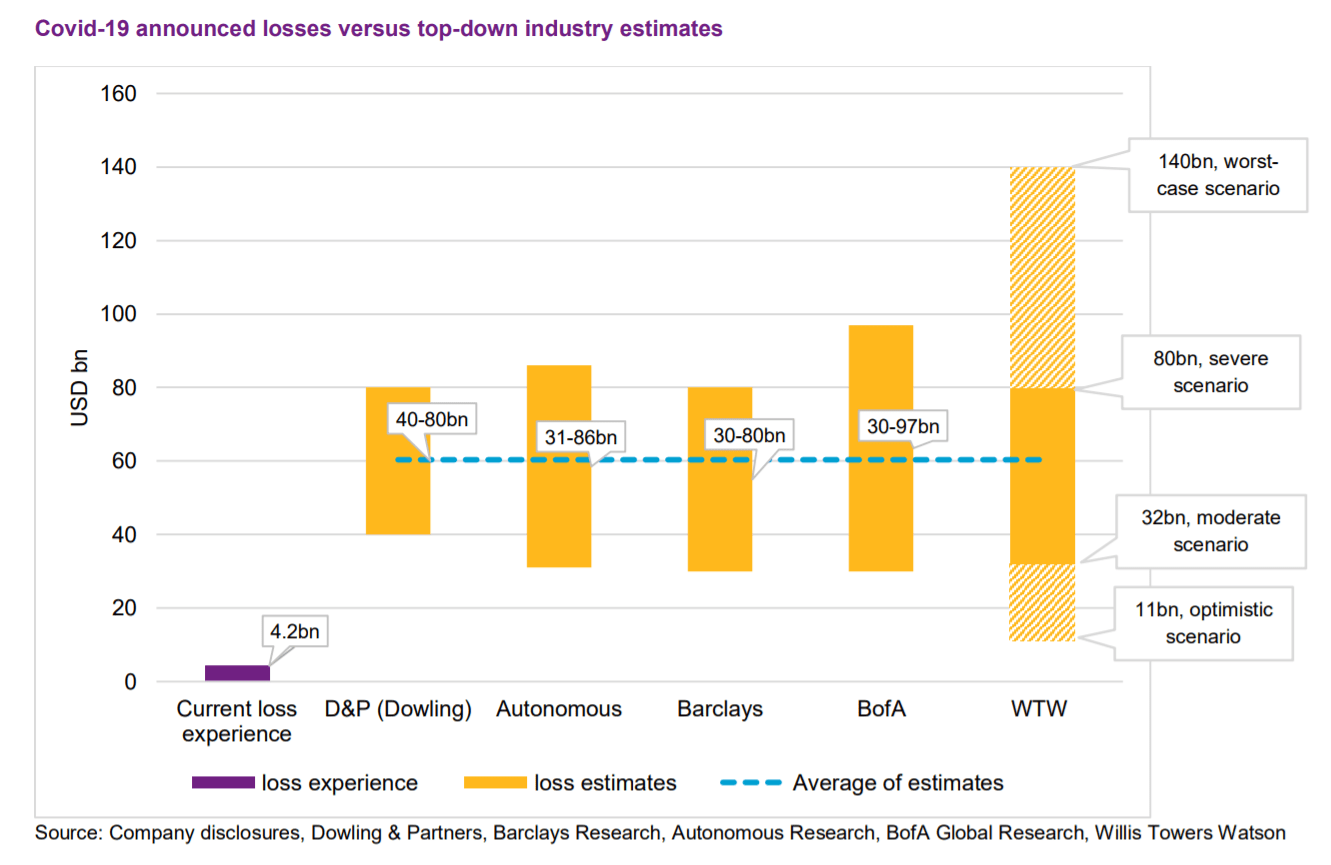 According to Willis Re, the $30-100 billion loss estimate range stems from several categories of loss or exposure for the industry.

This includes contingency coverage for large scale event cancellation, trade credit, surety and political risk policies that cover payment risk on trade receivables or risk against foreign government intervention, and directors & officers coverage from lawsuits that may stem from companies’ preparation and response to coronavirus pandemic.

Also factored in is employers liability coverage stemming from lawsuits that may come from dismissed employees claiming wrongful termination or discrimination, general liability losses arising from lawsuits alleging companies were negligent in allowing the transmission of infection, and  workers compensation for workers deemed “essential” who are affected.

Contingent business interruption coverage losses remain highly uncertain as they are typically excluded under standard policies, but coverage language varies, and in some cases affirmative pandemic coverage was offered.

Ultimate losses will also depend on the potential for government action to retroactively deem coverage in place even if specifically excluded.