The Consorcio de Compensación de Seguros (the Insurance Compensation Consortium, or CCS) is expecting to face a loss of approximately €203 million as a result of the recent flooding in Spain. 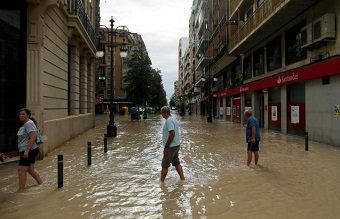 Record-breaking rainfall in the south-east of the country last week caused catastrophic flash-flooding, bursting river banks, sweeping away cars, and prompting the evacuation of 3,500 residents.

The CCS, which is a compulsory government catastrophe risk insurance program in Spain, believes it will receive around 30,000 compensation claims following the event.

The Murcia region alone will account for 13,800 of these claims, it said, of which 10,000 relate to homes, businesses, industries and civil works, and 3,800 to vehicles.

The total cost for this areas is estimated at €82 million, with most of the damage expected to come from Cartagena, Los Alcázares, Murcia and San Javier.

The scale of the impact in the provinces of Alicante and Valencia was similar, where claims are estimated to total 12,000, of which 9,300 relate to homes, businesses, industries and civil works, and 2,700 to automobiles.

The CCS anticipates a loss of €103 million in these regions, and identified the most affected areas as Orihuela and the rest of the Vega Baja region in Alicante, and Ontinyent and rest of the Vall de Albaida region in Valencia.

So far, the CCS has received 6,258 requests for compensation, corresponding to 3,896 homes, 1,548 cars, 667 businesses, offices and non-industrial establishments, and 147 industries.