Almost three quarters of the city of Venice has been submerged under floodwaters after Italy was battered by a storm with windspeeds of up to 180km/h (110 mph) earlier this week. 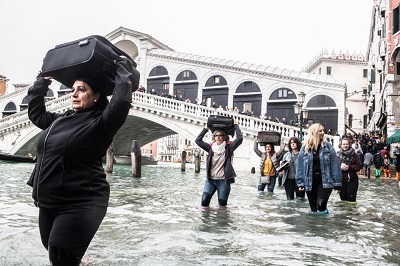 Tourists wade through the floodwaters in Venice. Source: PA-Press Association

Widespread wind and flood damage has been reported across the country, which is expected to drive losses for primary insurers in the area, some of whom could call on reinsurance support.

In Venice, strong winds blowing onshore from the Mediterranean caused storm surge of up to five feet, which, combined with heavy rainfall, resulted in the worst flooding the city has seen in a decade, with water levels reaching 154cm (61.4 inches).

The storm overwhelmed the city’s flood defences and climbed above the raised walkways normally put in place during high-tide flooding, with many business owners forced to rely on pumps to protect their stores after barriers failed to prevent the water entering through doors and windows.

Further north, the storm’s high winds damaged buildings and cars, downed trees and power lines, caused landslides, and led to the deaths of at least 11 people.

Some of the worst conditions were reported on the west coast of Italy, particularly in the north-west around Liguria.

Strong winds and rough waters also damaged many boats along the coast, including cruise ships, some of which were ripped from their moorings or collided with other vessels.

The Governor of Veneto, Luca Zaia, was quoted as saying that “the storms have caused a billion euros worth of damage.”

Flooding in Venice is becoming an increasingly frequent occurrence due to a combination of rising sea levels and shifting tectonic plates that are causing the region to slowly sink into the sea.

Insurers and reinsurers will continue to pay close attention to the aftermath of Italy’s recent storm as the full extent of the damage emerges and as losses are tallied.