Interview: Why should crop insurance lag on market penetration?

It would not be remiss to think that a product that transfers risk from farmers to insurers would be an easier sell, given that the former are less able to handle risk than the latter. Likewise, it should be an easy sell for a product that stabilises the incomes of fathers, incentivises them to boost productivity, and removes the onus on governments that may be called upon for subsidisation. 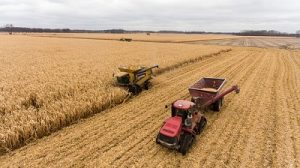 But crop insurance has yet to make a significant impact. Penetration is low, with many of the 500m smallholder farmers around the world finding the product often unavailable or inaccessible. The market is also limited by its underperformance, with crop insurance premiums accounting for only around $35bn—equivalent only one to 1.5% of non-life premiums.

Recently, Reinsurance News sat down with Arsira Thumaprudti, head of business development at Agritask, to discuss the issues at hand.

Asked about the current state of crop insurance and where it sits within the industry and the wider world economies, Thumaprudti says that it is yet to make a significant dent in more than a few nations. But Thumaprudti calls the potential growth ‘enormous’, saying that the market is expected to reach $53bn by 2027 with a growth rate of 6.5% per annum.

“Only a handful of countries,” she says, “enjoy the advantages of significant and long-established government subsidy programs and already-built insurance product distribution infrastructures. While many such as the US, China, and India tend to have high crop insurance penetration as a result, the products are usually highly regulated with not-so-flexible pricing or product design. In other words, ‘one size fits all’ for most farmers.”

There are also huge differences around the world. In Latin America, for example, an active private sector exists, all without the need for subsidies. Meanwhile, in Sub-Saharan Africa, only 3% of smallholder farms have any agricultural insurance.

“Most of the solutions in Latin America,” says Thumaprudti, “still work the traditional way, which is by acquiring data from physically inspecting field or farm damages. The result is considerable administrative and operational costs, which generate prohibitive premiums, thereby preventing many farmers from purchasing crop insurance in the first place.”

But in Sub-Saharan Africa, says Thumaprudti, most farmers rely on the smattering of government subsidies, which has led to inadequate risk coverage and limited population reach.

Thumaprudti added: “Moreover, the insurance solutions available are usually ‘parametric’ – with payouts dependent on external parameters such as a region’s level of rainfall rather than actual conditions in the field. While being the only practical choice in many places, there is no doubt that the parametric. Most insurance premiums are too steep for most farmers to afford, and private insurers are hardly motivated to set up the necessary distribution infrastructure or even send in workers to collect the field data needed to create suitable products.”

The industry should, says Thumaprudti, be pushing into this area, especially given the benefits that this product has for stakeholders.

She says that farmers will not have to bear the brunt of climate volatility with this product, given that it transfers risks away from them and to the insurers. Crop insurance, she adds, is also adept at helping meet the global demand for more-efficient food production by helping farmers stabilise their income.

She goes on: “In turn, this incentivises farmers to acquire high-quality seeds and farming equipment, easily get credit from financial institutions to make farming practices upgrades, and positively impact the broader community by contributing to local suppliers’ incomes.”

She concludes: “Climate change is not going anywhere. As it becomes a major global issue impacting agriculture everywhere, the need to shift the risks from the neediest farmers and transfer them to more resource-rich sectors via crop insurance is increasingly urgent.”