Nebraska submerged after “bomb cyclone” wreaks havoc across Midwestern US

Much of Nebraska remains submerged as the state’s emergency services attempt to cope with the worst flooding seen in 50 years. 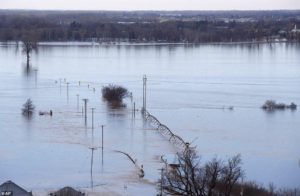 The floods are a direct result of last week’s “bomb cyclone”, which saw hurricane force winds, tornadoes, flooding and heavy snow sweep through various parts of the American Midwest.

Nebraska Governor Pete Ricketts has declared a state of emergency in 53 of its 93 counties, stating that one-third of the state has been impacted by floods and 2,600 locals living near rivers have been urged to evacuate.

‘This is the largest widespread amount of flooding we’ve had in the last half century,’ said Ricketts.

Following intense rainfall a number of Nebraskan rivers broke through their banks, cresting at up to 25 feet and crashing into neighbourhoods, forcing some residents to climb onto the roofs of their houses.

Floodwaters from the Niobrara River in the north of Nebraska broke through the Spencer Dam dam on Thursday, drowning the local town of Lincoln in water and completely washing out a bridge on US Highway 281.

The state’s Elkhorn River crested at 24.6 feet on Saturday, breaking its 1962 record by five and a half feet.

“All evacuation notices, suggested and mandatory, are strongly encouraged,” the Nebraska Emergency Management Agency said. “By ignoring evacuation recommendations, extraction requests made later may be delayed.”

The Missouri River, which borders Missouri and Nebraska reached 26 feet on Saturday – a foot below what’s considered major flooding – but is expected to crest on Wednesday or Thursday at 29.3 feet, according to local reports.

Rescue teams in boats have been attempting to rescue trapped residents since Thursday.

On Saturday two Nebraska National Guard Black Hawk helicopters spent the day fortifying an island on the Platte River that holds the City of Lincoln’s wells and water supply.

Rescue efforts on Saturday were hindered by levee breaches and the washouts of bridges and highway roads. Officials said power may be shut off in communities near the flooding rivers for safety reasons.

Meanwhile, The Missouri River in Fremont County, Iowa, rose two feet above its previous record level on Sunday. Authorities ordered evacuation of the town of Thurman’s more than 200 residents.

Parts of Missouri, Minnesota, South Dakota and Wisconsin were also anticipating flooding with several communities having already been evacuated since Friday night.

Given the variety and severity of weather events across multiple US states, it’s likely that insured losses will be significant.

Canopius US Insurance, Canopius Re ratings placed under review by A.M. Best

In light of worse-than-expected operating results for 2018 at Canopius AG, A.M. Best has placed under review with negative implications...