Reinsurance broker JLT Re has said that rate increases achieved at the key June 1st 2018 reinsurance renewals were negligible, as the firms Risk-Adjusted Florida Property-Catastrophe Rate-on-Line (ROL) Index rose by only 1.2%.

JLT Re’s research found that only low single-digit reinsurance rate increases were seen at the June 1st 2018 Florida property-catastrophe renewal, which again failed to meet the expectations of the market.

JLT Re’s Risk-Adjusted Florida Property-Catastrophe ROL Index increased by 1.2% this year, which while only a small rise and trailing behind the rate increases seen at the January renewals, was at least noteworthy in being the first rise in seven years. 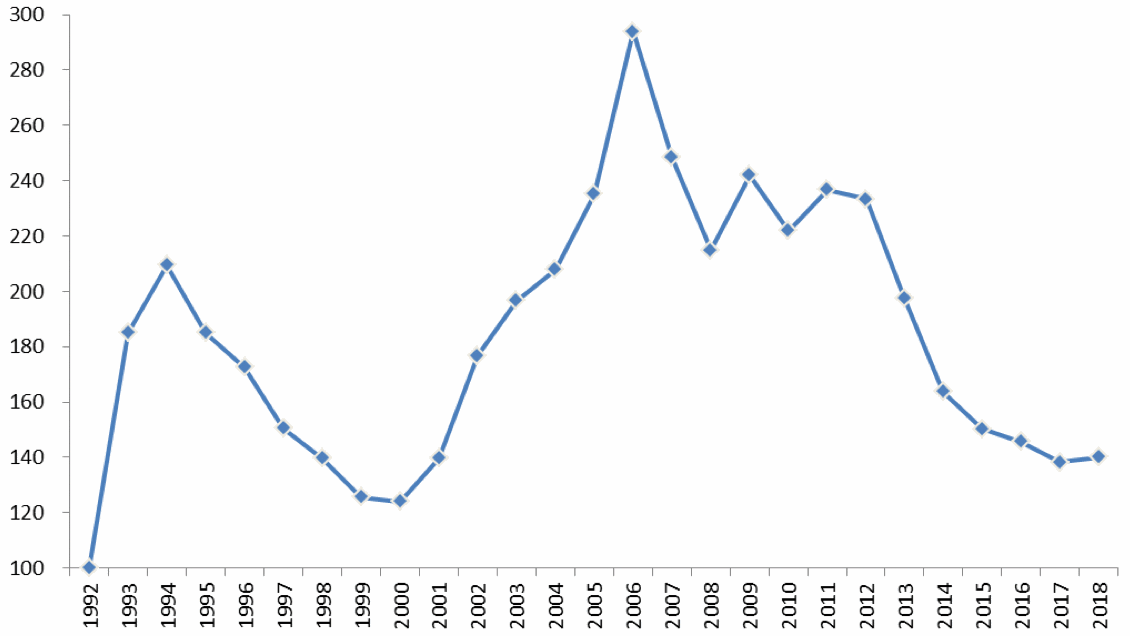 The rise of 1.2% at June 2018 compares to a decline of -5.1% last year, but US property-catastrophe reinsurance rate rises are slowing, as the Index failed to record as significant a rise as was seen across US business at January 1st 2018.

This is despite there being a greater number of loss-affected programmes renewing in Florida this June, following the impact of Hurricane Irma’s landfall last year.

As a result of this, pricing for Florida property-catastrophe reinsurance business remains 40% below levels seen in 2012 and only 13% above the previous low point of the cycle in 1999/2000.

JLT Re said that reinsurers continue to prioritise cedents with better performing portfolios during the Florida renewals, with a particular focus on underwriting and claims handling.

Irma offered reinsurers a chance to assess cedents’ post-event capabilities, although it only had a muted impact on reinsurance pricing in Florida.

Brian O’Neill, Executive Vice President, JLT Re (North America) Inc., commented, “Renewal experiences in Florida were wide-ranging, with some cedents’ loss-affected layers seeing risk-adjusted rate increases in the mid-to-high single-digit range. Cedents who had demonstrated strong post-event capabilities clearly benefitted from the additional capacity in the market. Rate increases for loss-impacted layers were muted, while in some cases, loss-free layers were even down modestly. Overall, the renewal was highly competitive, reflecting abundant capacity and only moderate increases in demand despite the market suffering its most expensive catastrophe loss year on record in 2017.”

JLT Re noted that insurance-linked securities (ILS) markets were “vigorously looking to deploy capital at the Florida property-catastrophe renewal,” resulting in additional pressure on pricing.

Additionally, there was evidence of some ILS markets further expanding into traditional areas of the market, including the provision of reinstatements, a key programme feature that has helped traditional reinsurers hold onto business in the past.

As a result, JLT Re notes that alternative capital providers have been able to be competitive on more than just price, offering coverage features that were once the sole domain of the reinsurer.

These included single-shot transactions such as top or drop aggregate cover and reinstatement premium protection and were occasionally seen to be coming in cheaper as well.

As a result, traditional reinsurers had to defend market share, but they were not surprised by this as all of the signs had pointed to a renewal market awash with capacity and greater competition this year.

JLT Re said that the reinsurance market met buyers’ needs at the June 1st renewal and this trend is expected to continue throughout the rest of the year and into 2019.

“The value and efficiency of reinsurance protection is once again being demonstrated by allowing cedents to react speedily to underwriting opportunities,” the broker said.

The World Insurance Report (WIR) from Capgemini, in collaboration with Efma, has found Insurers face losing significant ground to the...