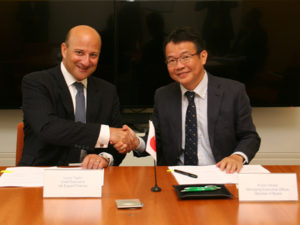 The agreement supports a framework for reinsurance underwriting between the two entities, and enables cooperation between the pair in relation to the export of Japanese products via a reinsurance transaction that also involves UK exporters.

A statement on the new agreement explains that it’s applicable to all ECA finance in which UKEF participates, with the need to apply being dependent on the specifics of each individual case.

“NEXI is will provide support in terms of export credit to enhance industrial cooperation between Japan and the UK in a wide range of fields by proactively utilizing the reinsurance scheme based on this agreement,” explains the announcement.

NEXI, a Japan government financial institution, will reportedly continue to grow its reinsurance network with more and more countries, as it looks to actively support Japanese firms’ foreign export plans.

“When a Japanese company joins a project in a third country in conjunction with a foreign company, One-Stop-Shop Reinsurance agreements make it possible for NEXl to undertake the risk portion of exports made from Japan,” explains the announcement.

Adding; “Suppose a Japanese company exports to a third country with a foreign company under a consortium, and the foreign company obtains insurance from its own ECA for the entire contract amount including the portion exported by Japanese company; NEXl will provide reinsurance to the foreign ECA for the portion exported from Japan.”