Mexican reinsurer Patria Re, or Reaseguradora Patria, has appointed Nick Benardout to manage its special purpose syndicate (SPS) at Lloyd’s and the firms London operations. 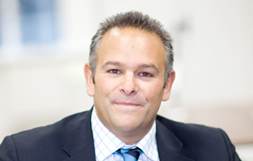 Benardout joined Patria Re yesterday to run the firms PAT6125 special purpose syndicate at Lloyd’s of London. He has been hired to run the London office for the reinsurer, with the goal of strengthening its corporate structure and consolidating the international reinsurance business underwritten within Patria Re’s Lloyd’s vehicle.

Previously Head of Property Treaty reinsurance at Berkley Re, before which he was a property treaty underwriter at Chaucer, Benardout has extensive experience in London market property reinsurance underwriting and operations. He also previously held roles at Hart Re, Mercantile & General and began his career at E.W. Payne.

Patria Re launched its special purpose syndicate 6125 at Lloyd’s in 2015, working in partnership with Ironshore’s managing general agent Pembroke.

The SPS was established to add diversification to Patria Re’s portfolio, as well as to help it expand further into regions where it already had exposure.

Hamilton, Bermuda headquartered and globally operated insurance and reinsurance group Everest Re is set to join the S&P 500, moving...