The pace of decline across pricing and rate in the reinsurance market accelerated at the June 1st 2017 renewal, according to broker JLT Re, with rates down as much as 10% in places, and averaging a 5% decline.

It’s not the news reinsurers were looking for, but the excess levels of capacity and only tepid new demand mean that competition and pricing pressure continues, with the resulting ability for ceding companies to gain discounts and improved terms or conditions.

Bob Betz, Executive Vice President, JLT Re in North America, commented on the June reinsurance renewal; “While the pace of average rate reductions accelerated at 1 June 2017 compared to last year, the results were very much determined by cedent size and performance.

“After a difficult 18 months for the Florida insurance market, where attritional losses and mounting litigation related to assignment of benefits (AOB) claims contributed to approximately 40% of state insurers suffering underwriting losses in the first quarter of this year, smaller companies with capital surplus of less than USD 25 million in particular have come under increased rating agency pressure. At a time when markets are focusing on performance, these carriers generally saw less favourable outcomes in both price and reduced line size.”

JLT Re’s Risk-Adjusted Florida Property-Catastrophe ROL Index dropped by 5.1% at June 1st, with declines generally in a range from flat to down 10%, resulting in a greater average reduction than last year’s 3.1% decrease. 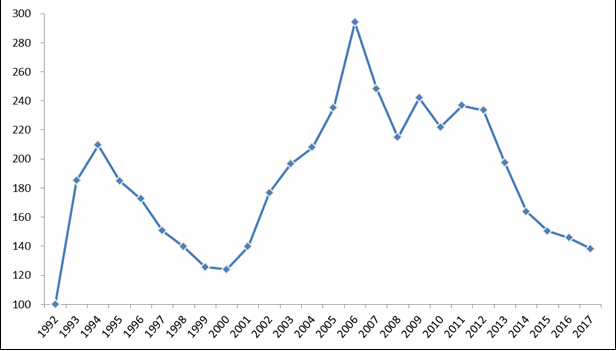 Bob Betz, continued; “More intense competition for cedents with a stronger track record saw risk-adjusted pricing typically fall within a range of flat to down 10% at 1 June 2017. But even here, results were often layer specific, reflecting historical performance, loss activity and terms and conditions.”

Excess reinsurance capacity and strong competition between traditional and alternative markets helped to accentuate the declines at June 1st, with ILS fund markets demonstrating “renewed vigour” to deploy capacity, which JLT Re says was notable as they looked to grow their market shares.

With these rate decreases, reinsurance pricing for Florida business now sits around 40% down on 2012 levels and only 10% above the previous cyclical low of 1999/2000, according to the broker.

Despite reinsurers being aware of where this pricing level sits, and the losses they suffered during the year as well as the impact of the Ogden Rate, the excess capacity in the market continues to mean the general trend is downwards and the bottom of the reinsurance market remains out of reach.

On the retrocession side of the market, JLT Re sees pricing as having dropped around mid-single digit percentages on a risk-adjusted basis, with demand remaining very high for coverage.

New demand continues to be seen in retrocession as well, with; “A number of carriers therefore lowered retentions and added additional layers of coverage at 1 June 2017. Others became more specific in their appetites, moving from worldwide covers to Florida only. A number of reinsurers also moved to buy more occurrence coverage and less aggregate cover during the renewal,” JLT Re explained.

JLT Re now estimates that dedicated reinsurance sector capital reached a new high at USD 325 billion, up from USD 321 billion at year-end 2016. Premiums, only totalled USD 255 billion at the end of 2016 though, meaning that the excess is sloshing around the market looking for a home and exacerbating the pricing pressure. 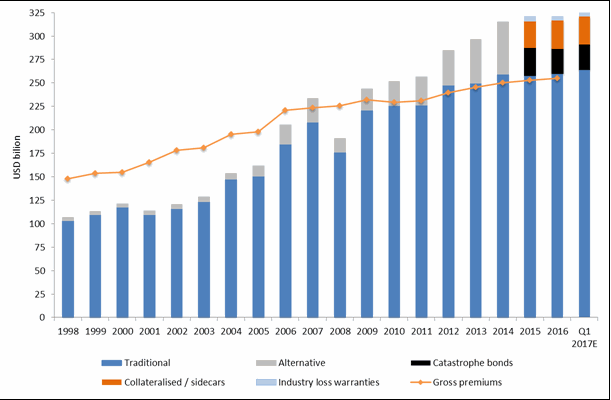 Ed Hochberg, Chief Executive Officer, JLT Re in North America, also said; “While Hurricane Matthew came close last year, no major hurricane has made landfall in Florida or the United States since Wilma in 2005. The return time of an 11-year stretch without a major hurricane landfall across the US coastline is in excess of 300 years, reminding us that such good fortune cannot go on forever. In fact, some forecasts now indicate the 2017 North Atlantic hurricane season could see above average activity. After six consecutive years of falling pricing, reinsurance currently offers an extremely efficient form of capital. Carriers with the foresight to utilise today’s cost effective reinsurance can help secure future profitability by preparing for the next market changing event(s).”

While these issues of excess capacity, sluggish new reinsurance demand and growing alternative capital and ILS competition continue reinsurers will have to continue searching for new growth opportunities in order to profitably deploy capacity.

The renewals in July will likely experience the same outcome as June and with little to change the trend on the horizon, further slow rate declines are likely to be seen next January as well.