Overall, insured losses from catastrophes amounted to $19 billion in H1 2019, with $15 billion, or 79% caused by natural catastrophes, and the remaining $4 billion being from man-made disasters.

Overall, catastrophe events in the period resulted in economic losses of $44 billion, with natural catastrophes accounting for $40 billion of this total. According to Swiss Re, this is far below the $109 billion average first-half economic losses for the past ten years, and also lower than the $51 billion recorded in H1 2018.

Roughly 42% of global economic losses in the first-half of the year were covered by insurance, and Swiss Re highlights the fact that many of the high loss events occurred in places with low insurance penetration.

Swiss Re notes that the main driver of insured losses in the first-half of 2019 were thunderstorms and flooding events in different parts of the world.

Described as secondary perils, thunderstorms, torrential rains and snowmelt caused the highest losses through both wind and water damage in H1 2019 in many regions, including the U.S., Canada, Europe, Australia, China, and Iran.

The chart below, provided Swiss Re, details H1 catastrophe losses, both insured and uninsured, over the past decade. 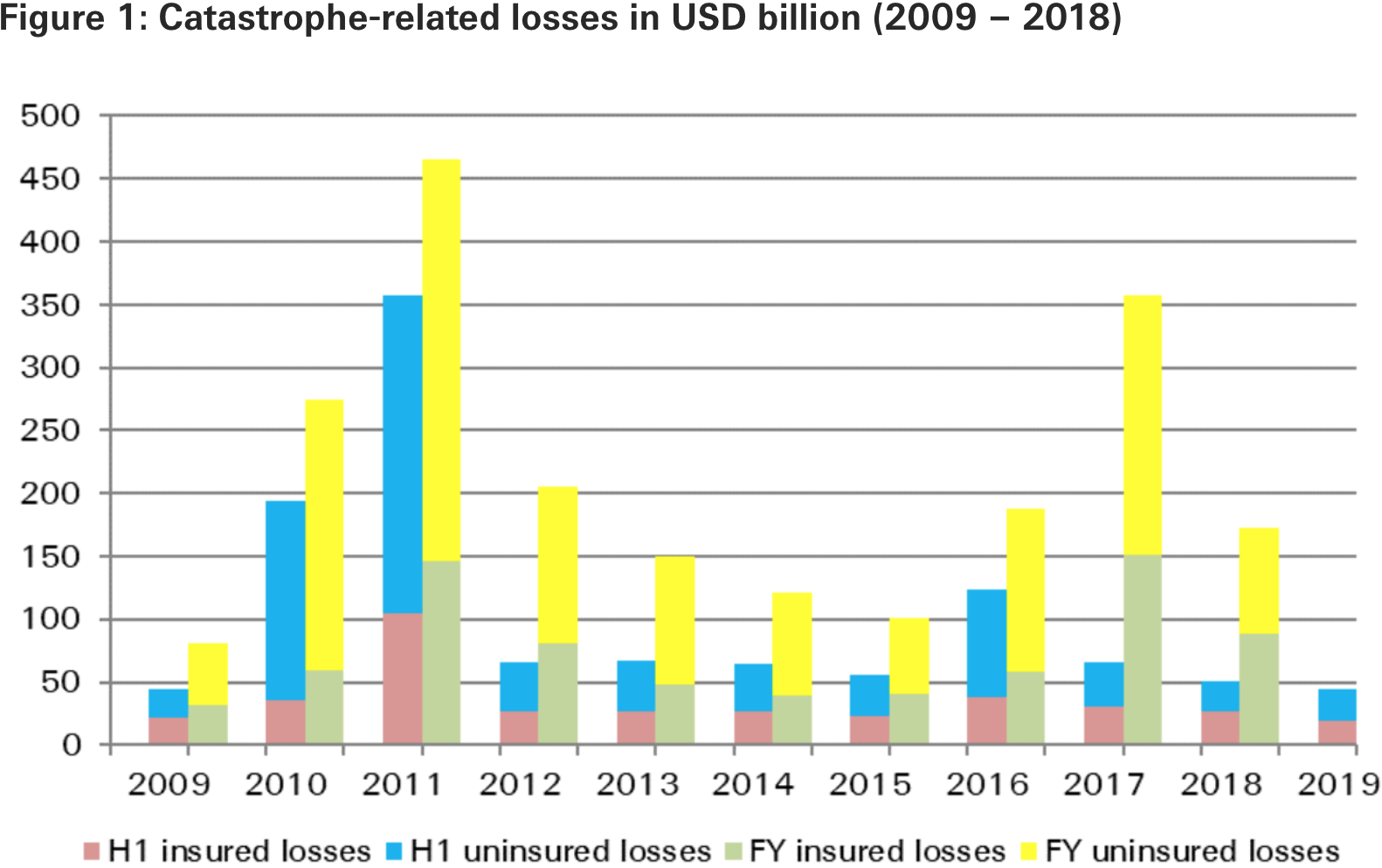 Head of Catastrophe Perils at Swiss Re, Martin Bertogg, said: “The experience of the first half of this year has once again exposed the existing protection gap issues in emerging countries. For example, cyclone Idai showed just how fragile African coastal communities are. And in India, cyclone Fani inflicted widespread damage and large uninsured losses. Similarly, the nature and location of the events underline the theme of secondary perils taking a larger share of the overall loss burden, as we analyzed in more detail in our last catastrophe sigma.”

Similarly to last year, numerous parts of the world experienced heatwaves and dry weather conditions in the first-half of 2019, although Swiss Re notes that the full impact of the extreme summer weather is yet to be understood.

“Intense heatwaves and dry spells of the like we’ve seen over the last few years are expected to become more frequent, exacerbating the conditions conducive to wildfires and agriculture losses. We also expect more variable rain patterns, as rising temperatures load the atmosphere with more vapour. Society will need to adapt and prepare for these increasing occurrences,” said Bertogg.