German insurer TALANX had joined a chorus of firms now refusing to provide cover for the East African Crude Oil Pipeline (EACOP), a move that could have severe ramifications for the project. 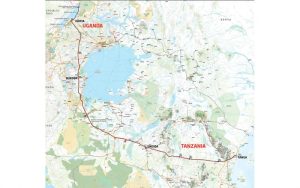 A statement from TALANX, posted to the Stop EACOP website, states that the firm is joining 11 other (re)insurers, including 4 of the world’s biggest (re)insurance companies – Munich Re, Swiss Re, Hannover Re, and SCOR in refusing to supply coverage to the pipeline.

The ramifications of this may be severe. Stop EACOP says Uganda’s Insurance Act stipulates that insurance services must be sourced locally at first and up to a maximum of 30% of the project.

Stop EACOP wrote: “The question of where or if EACOP will find international insurance/reinsurance cover remains very much open and the pressure on international reinsurers, and on the EACOP insurance broker Marsh, to distance themselves from this ecological and social disaster grows every day. #StopEACOP continues to call on (re)insurers to abstain from providing (re)insurance to the EACOP project. It is the socially, environmentally, and economically right thing to do.”

It added: “However, it is our understanding that the EACOP project still requires significant foreign insurance and reinsurance support. In accordance with the EACOP Act, a substantial portion of reinsurance (the other 70%) should come from international reinsurance companies, which have the appropriate credit ratings and financial capacity to absorb the losses if and when accidents occur. […] There is no indication that international reinsurance has been sourced, and this does not appear to be disputed by recent statements from Uganda’s Insurance Regulatory Authority or members of the ICOG.”

According to Stop EACOP, the world’s top four international reinsurers, Munich Re, Swiss Re, Hannover Re, and SCOR have all clearly stated that they will not reinsure the EACOP, often citing environmental and social concerns. A growing number of other leading international insurers, including Allianz, have taken the same position.

The pressure group says that those refusing to rule out doing so include Chaucer, Beazley, AEGIS London, AIG, Aspen, Chubb, Liberty Mutual, and Lloyd’s.

#StopEACOP has been pushing for a number of the world’s largest re/insurance companies to pull back from the scheme.

On the campaign’s website, it states that French oil giant Total, and the China National Offshore Oil Corporation are on the cusp of building a massive crude oil pipeline through the heart of Africa, which will displace communities, endanger wildlife, and ultimately tip the world closer to full-blown climate catastrophe.