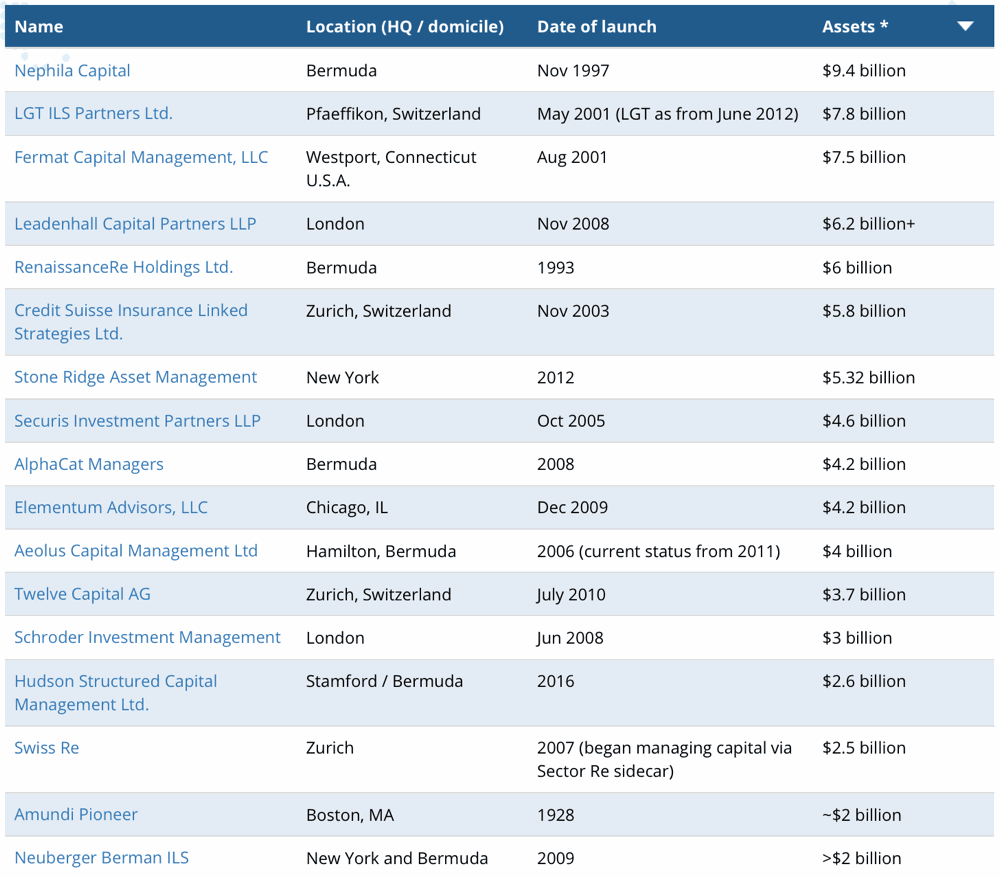 While the $61 billion figure isn’t the highest ever recorded ($64 billion in 2018), it does show that in spite of the catastrophe losses of recent years and subsequent trapped capital issues, appetite remains and importantly, investor confidence in the space appears to be rising.

As shown by the directory, a number of the top-ten managers grew their ILS assets to record highs in 2020. This includes LGT ILS Partners Ltd. now at USD 7.8 billion; Fermat Capital Management, LLC now at USD 7.5 billion; Leadenhall Capital Partners LLP now at more than USD 6.2 billion, and RenaissanceRe now at USD 6 billion.

However, Nephila Capital remains the world’s largest ILS manager, with AuM of USD 9.4 billion, despite having not grown in the last year.

Taking a wider view at the list of ILS managers, and Artemis’ data shows that a number of managers that sit outside of the top-ten but that manage in excess of USD 2 billion of assets, also recorded some robust growth in the period.

In total, the subset of ILS fund managers in the directory with AuM of more than USD 2 billion, now totals just shy of USD 81 billion.

As the data reveals, reinsurers RenRe and Swiss Re both grew their ILS and third-party reinsurance capital AuM in 2020.

At Bermuda-based RenRe, growth has been evident in its joint-ventures DaVinciRe Holdings Ltd., Vermeer Reinsurance Ltd., and Langhorne Re Ltd., alongside its Upsilon ILS strategies, and the RenaissanceRe Medici Fund Ltd.

Combined, the above vehicles and structures account for the USD 6 billion of largely third-party institutional investor backed reinsurance capital managed by RenRe.

Swiss Re began managing third-party reinsurance capital in 2007 via its Sector Re collateralised sidecar vehicle, which grew to roughly USD 1.1 billion in H2 2019.

The company expanded its ILS activities with the Viaduct Re sidecar structure for PGGM, and in early 2019, launched its Alternative Capital Partners (ACP) unit, designed to develop investor relationships and establish the best capital mix for its overall group structure.

The reinsurer later announced the establishment of the Swiss Re Insurance-Linked Investment Management Ltd. (SRILIM), a FINMA authorised asset manager for investment funds. Additionally, Swiss Re has registered a special purpose insurer (SPI) in Bermuda for its Core Nat Cat Fund under 1863 Fund Ltd., the first ILS fund to be directly managed by the firm.

Overall, and thanks to expanding quota share sidecar activity and the increased desire of Swiss Re to leverage alternative, or third-party capital, the reinsurer’s ILS AuM stood at USD 2.5 billion around September, but this has likely increased as well with the launch of its first dedicated ILS investment fund.

This directory is based on best efforts showing capital that is allocated to insurance-linked investments across a range of managers.