The sector, which began with the placement of a $45 million all-peril cat bond in 1996, has seen a gradual increase in the utilisation of insurance-linked securities (IL) solutions, with annual issuance volumes regularly setting new records.

According to Aon, alternative capital stood at just $22 billion in 2009, meaning its growth rate over the past decade has far exceeded that of traditional reinsurance capital.

Since 2016, alternative capital has remained at or near record highs, with around $93 billion currently in the re/insurance marketplace of an estimated $610bn total reinsurance capital.

A full detailed list of every cat bond issued to date can be found in the Deal Directory of our sister publication, Artemis, including a chart breaking down cumulative issuance by year (shown below).

The Artemis Deal Directory accounts for a broader range of transactions than Aon’s data, including private catastrophe bonds, life & health and mortgage deals structured in the same form as a cat bond. 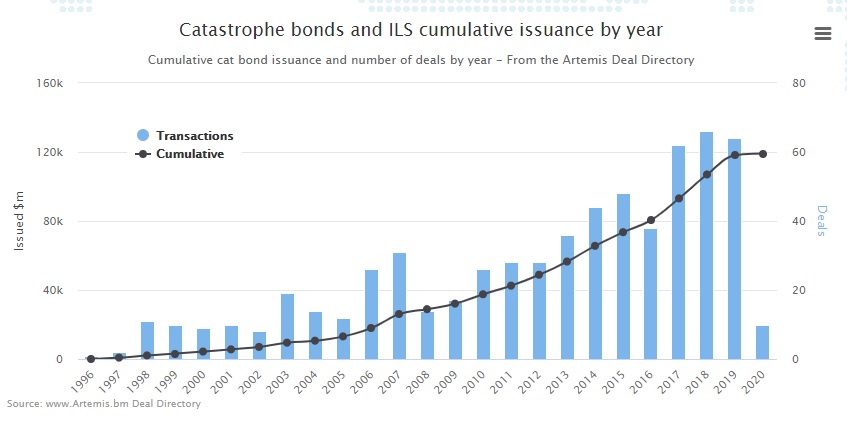 “From its beginnings in 1996, the insurance-linked securities sector has shown remarkable growth, reaching a point today where it is an integral component of the way in which re/insurers approach risk transfer,” said Paul Schultz, CEO of Aon Securities.

“Having endured significant tests in recent times, the sector has shown strength in adversity, proving that re/insurers and investors view ILS as being an enduring and important part of the industry,” he continued.

“Reaching this $100bn milestone is a fantastic achievement, and we anticipate many further successes for ILS in the years to come as it expands into a greater number of geographies and perils.”

Over the past decade, ILS has provided a robust non-correlating asset class for investors, producing an average annual return of 6.38%, and 7.48% for 2019.

Sector investor numbers have similarly grown significantly during this time, with orderbooks in 2019 inclusive of 23% more investors, on average, than orderbooks in 2015, allowing average allocations to decrease from $13 million to $9 million.