Reinsurer capital offset a 3% decline seen in 2018 by increasing 7% over the first nine months of 2019 from $585 billion to $625 billion, according to a report from global re/insurance broker Aon. 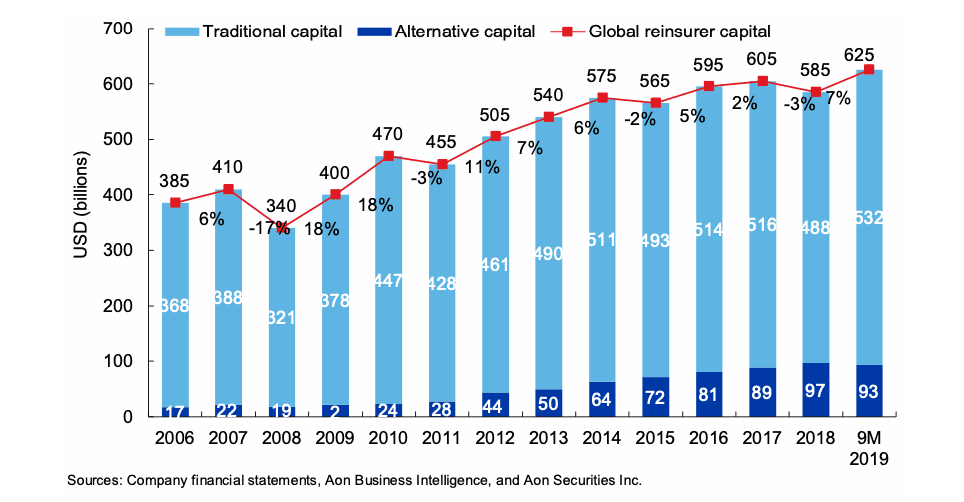 This was helped by traditional reinsurance capital increasing 9%, or $44 billion to $532 billion, over the same nine month period.

This reduction in alternative capital, Aon says, was largely driven by a reduction in collateralized reinsurance as catastrophe bonds, sidecars, and ILWs remained largely in line with 2018.

Aon estimates that global reinsurer capital rose by 7% to $625 billion over the nine months to September 30, 2019.

The broker says this calculation is a broad measure of the capital available for insurers to trade risk.

Traditional equity capital, meanwhile, rose by 9%, or $44 billion, to $532 billion, driven primary by a recovery in the capital markets since the low at the end of 2018. Aon notes how this total is only up by 4% since the end of 2014.

While the sector remains well-capitalised, analysis published earlier in 2019 by Standard & Poor’s suggested that the aggregated risk-based capital adequacy of their top 20 rated reinsurers has steadily declined since 2014.

With the increase in the last 12 months, Aon says it remains to be seen whether required capital models will reverse this trend.

Headline assets under management in the alternative capital sector are estimated to have fallen by 4%, or $4 billion, to $93 billion, driven by the payment of losses and investor redemptions.

It is estimated that around $15 billion of collateral remains trapped in the wake of recent major natural catastrophe events and that the reduced amount of capacity available for deployment is impacting the retrocessional market.