Winemakers in the Bordeaux and Cognac regions of southwest France are facing the prospect of bankruptcy after violent hailstorms inflicted extensive damage across hundreds of vineyards. Official sources estimate 10,000 hectares (24,710 acres) out of a total 70,000 hectares were affected. 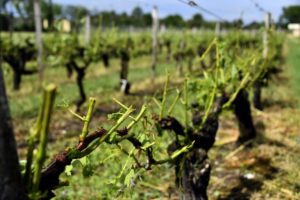 The impact of the storm on winemakers could lead to a jump in agricultural insurance claims from vineyards across the region.

This extreme weather activity follows a disastrous 2017 for producers across Bordeaux – France’s second-largest wine producing region – where frosts caused by spring temperatures of -3°C led to 39% loss of harvest and a financial toll of approximately €1.6 billion.

The 15-minute, one-kilometre wide hailstorm first hit the south of the region on Saturday, hitting the Pessac-Leognan region and the south of Medoc before reaching Cotes de Bourg and Cotes de Blaye on the right bank of the Gironde river and, further east, in the Gensac and Pessac-sur-Dordogne. The vineyard of Cognac was also hit by hail.

Frages added that some winemakers had lost 100 percent of their harvest.

Didier Gontier, head of the winegrowers association in the Cotes-de-Bourg area, has said the destruction could bankrupt some growers, particularly those badly affected by the heavy toll of 2017’s vintage.

Producers in the Côte des Bar area of Champagne have also been recovering from intense storm activity, after golf ball-sized hailstones ravaged nearly 500 hectares of vines nearly two weeks ago.

Brigitte Batonnet of Champagne producers’ group CIVC commented, “We already think more than 300 hectares were destroyed and that is without counting the storm we had a few days ago and the one forecast tonight.”