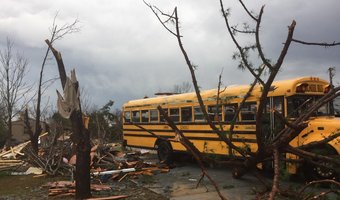 Major damage from early March tornadoes, hail and straight-line winds in the Plains, Midwest and Southeast caused estimated economic losses of $1.7 billion and insured losses of $1.2 billion for this event alone, Aon reported.

The above-average number of March storms comes after what’s been an intense first quarter of the year for the U.S. – where developing storm systems have intensified after being aggravated by the mildest winter on record and high Gulf of Mexico sea temperatures.

On the other side of the globe, Australia’s southeastern Queensland and northern New South Wales saw devastating floods after Cyclone Debbie made landfall, expected payouts have reached $310 million and are still rising.

Steve Bowen, Impact Forecasting director and meteorologist, said; “There was no shortage of significant natural disasters in March, and while re/insurers’ focus was largely on the events in the United States and Australia, there were other major occurrences in emerging areas for the industry.

“For instance, a phenomenon deemed a ‘coastal El Niño’ was blamed on catastrophic flooding in both Peru and Colombia, highlighting that there remain areas around the world where insurance can play a critical role in helping people in the aftermath of a disaster.”

In Latin America, March brought catastrophic flooding and landslides in Peru and Columbia, destroying over 245,000 homes and structures, leaving economic losses upward of $3.1 billion and hundreds left dead or missing.

A magnitude 5.0 earthquake in China’s Yunnan province damaged nearly 45,000 structures, and severe drought conditions worsened in Somalia, Ethiopia, and Kenya, causing the United Nations to appeal for $1.9 billion in aid.

March losses were by far heaviest felt in the U.S., which is the only region to have hit payout levels above its ten-year mean and median for Q1, although globally re/insurance payouts have been below average for 2017 so far.

Total public and private insurance entities in the U.S. are estimated to have paid out more than USD5.7 billion in claims for this year’s first quarter, which comprised 74 percent of the global total, said Aon.