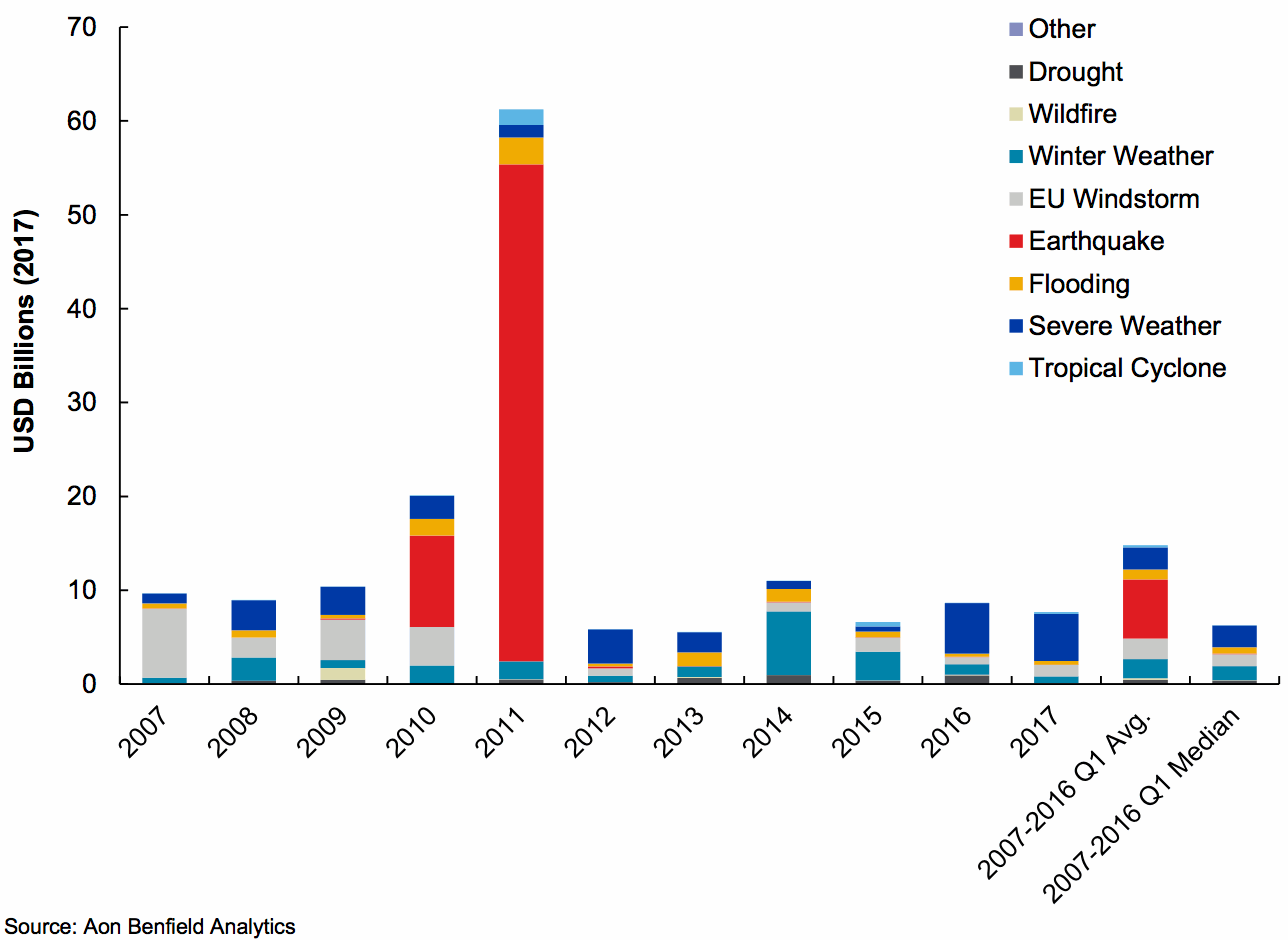 Following on from last year’s insured loss records – where the U.S. accounted for a large majority of global insured losses – in 2017 Q1 nearly three-quarters of insured losses stem from the U.S., which was home to six out of the ten costliest global Q1 events.

“Public and private insurance entities in the US are estimated to have paid out more than USD5.7 billion in claims, which comprised 74 percent of the global total,” said Aon.

Most Q1 losses came from a very active start to the severe weather season, with high numbers of tornadoes, hail, and damaging wind events across the U.S. Plains, Southeast and Midwest and flooding and mudslides in California and the Intermountain West.

Developing storm systems across central and eastern U.S. were fuelled by one of the mildest winters on record and Gulf of Mexico sea surface temperatures at levels well above average – showing a global-warming induced early and hard-hitting start to the severe weather season.

Aon analysts said these losses made the U.S. the only region to hit payout levels “above its ten-year mean and median,” although globally, losses were below average for Q1.

Across Western and Northern Europe strong Windstorms caused widespread wind and flood damage, amounting to an estimated $1 billion in insurable loss – Aon Benfield said this is the highest payout seen for the peril since 2015.

Looking forward to what lies ahead for the industry in terms of insured losses for the remaining 2017 fiscal year, Aon Benfield stated “there is growing consensus that El Niño will officially return during the second half of the calendar year,” this could indicate a continuation of the trend of severe weather perils leading 2017 losses.

The El Nino phenomenon’s peak influence  is expected to hit throughout August to October, influencing the Atlantic Hurricane Season, Aon said “El Niño typically has a negative influence on cyclogenesis in the Atlantic Ocean given cooler sea surface temperatures and increased wind shear.”

In addition, the central and eastern Pacific Ocean’s sea surface temperature levels are continuing to warm, and Aon said in the first quarter this has already led to Peru’s catastrophic floods.

The warm phases of ENSO, or El Nino, have often led to drier conditions in southern Asia and parts of South America and Africa, meaning these regions could see impact to agriculture and other sectors from droughts as the year progresses.

HSB Engineering Insurance (HSB), the specialist industrial engineering and construction insurance arm of reinsurer Munich Re, has appointed a new...