Global catastrophe risk modeller, AIR Worldwide, has provided an insurance industry loss estimate from the impacts of the Magnitude 8.1 earthquake that struck off the coast of the Mexican state of Chiapas, of between MXN14 billion (US$790 million) and MXN20 billion (US$1.13 billion). 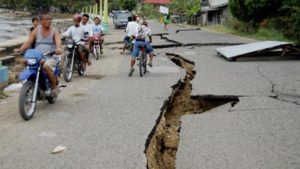 The quake, of which the epicentre struck on September 7th, 2017, around 100km (62 miles) south-west of the town of Pijijiapan, occurring around 35km deep, according to the United States Geological Survey, is the strongest to impact Mexico in a century.

AIR’s loss estimate of more than $1 billion explicitly captures damage from ground shaking, and the loss estimate includes physical damage to onshore property structures and their contents, and also auto.

It’s important to note that the catastrophe risk modeller’s insurance industry loss estimate is subject to uncertainty, as it’s based on assumptions about the take-up rates of earthquake insurance in the region. AIR also notes that the overall economic loss is expected to be far higher than the insured loss, which highlights the need for greater protection in the region against the peril.

“The range in AIR’s loss estimates reflects uncertainty in the slip distribution at the fault, modeled ground motion, and damage estimation,” explains AIR.

States Oaxaca and Chiapas were hit the hardest, says AIR, with the regions experiencing some severe aftershocks. Furthermore, 96 lives were lost as a result of the quake. AIR explains that according to federal officials, 12,000 homes were damaged in Oaxaca, while the number of homes destroyed ranges from 971 in Oaxaca, to 5,000 to 7,000 in Juchitan alone.

Chiapas experienced much greater damage, overall. According to the Chiapas Civil Protection Agency, over 54,000 homes were damaged, 37,000 of which had some partial damage, and almost 18,000 of these collapsed. According to state authorities 97 municipalities were impacted, mainly Tonala, Villa Flores, San Cristobal, Cintalapa, and also Jiquipilas.

Furthermore, AIR reports that 98 healthcare facilities and 129 public buildings experienced damage in Chiapas, with many roads, highways and bridges also being affected.