Analysts at Morgan Stanley believe that the insurance impact from the obstruction to the Suez Canal will be “minimal”, as efforts to free the grounded container ship have finally proved successful. 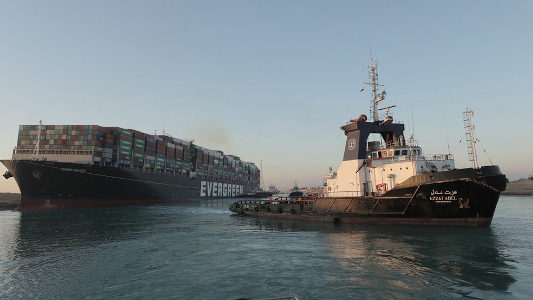 Egypt’s vital trade waterway has been completely blocked since Tuesday, resulting in a backlog of 367 vessels that are currently waiting to pass through.

A 400m-long, 224,000-tonne container vessel called the Ever Given became lodged diagonally across the canal after losing its ability to steer en route from Yantian to Rotterdam.

But now, after almost a full week of rescue efforts, authorities have succeeded in dislodging the ship from the banks of the canal.

The Ever Given’s course has been corrected by about 80%, the Suez Canal Authority said, and there are hopes that the ship will be able to move along once high tide arrives later today.

As we previously reported, estimates showed that the disruption caused by the blockage was impacting global trade by between $6 billion and $10 billion per day.

On average, nearly 50 vessels pass along the Suez Canal every day under normal circumstances, although at times the number can be much higher than that, with about 12% of global trade passing through the 120-mile canal.

Specialist broker McGill and Partners warned that the re/insurance industry could be looking at costs in excess of $100 million due to the Suez obstruction. And others noted that the incident would have significant ramifications for global supply chains, which have already been under strain since the outbreak COVID-19 pandemic.

However, in more recent analysis Morgan Stanley has downplayed the insurance impact of the crisis, suggesting that P&C industry losses “appear quite manageable”.

The three primary coverage that could be impacted include hull, cargo and marine liability, it explained.

In the case of hull, the insurance purchased by Japanese firm Shoei Kisen KK for the Ever Given only covers property damage to the ship itself. So with the ship having now been freed without the need for destructive measures, these losses should be minimal.

Likewise, the cargo insurance in place provides coverage for items being shipped on the vessel, which is carrying about 20,000 containers of goods, with approximate value of about $90 million.

It’s believed that the Ever Given has been able to maintain power with refrigeration still working to keep perishable goods safe, but potential damage to goods on the other backlogged ships blocked in the canal also needs to be considered.

Finally, marine liability insurance provides protection to the ship owner/operator should their negligence cause damages to others.

While potential negligence has yet to be determined here, Morgan Stanley expects to see law suits stemming from the incident, possibly including claims from the Egyptian government for lost revenue from the canal shut down.

Coverage is provided by the UK Protection and Indemnity Club that retains the first $100 million of losses. Above this amount, the commercial reinsurance market kicks in with coverage up to $3.1 billion.