Analysts have warned that the ongoing blockage in the Suez Canal is likely to have significant repercussions for global supply chains, which have already been under strain since the outbreak COVID-19 pandemic. 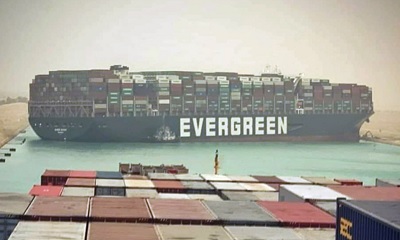 Figures from Euler Hermes, a trade credit subsidiary of Allianz, show that for each day the disruption continues, global trade could be impacted by between $6 billion and $10 billion of additional costs.

The vital trade waterway through Egypt has been blocked by a grounded ship since Tuesday, resulting in a backlog of more than 150 ships now waiting to pass through the route.

There are hopes that it may be possible to move the Ever Given on Monday, when the tide could be high enough to dislodge the 400m-long, 224,000-tonne container vessel. But a specialist salvage company assisting the operation says the process could take weeks.

On average, nearly 50 vessels pass along the Suez Canal each day under normal circumstances, although at times the number can be much higher than that, with about 12% of global trade passing through the 120-mile canal.

Already, specialist broker McGill and Partners has warned that the re/insurance industry could be looking at costs in excess of $100 million due to the ongoing obstruction in the Suez Canal, although this figure will likely continue to rise for every day the obstruction remains in place.

But while the blockage alone represents something of a crisis for the shipping industry and global trade, Jonathan Owens, a logistics expert from the University of Salford Business School notes that the incident “could not have come at a worse time.”

“This situation has piled on more problems for beleaguered shipping companies, who were already facing disruption and delays in supplying products to customers due the unbalanced supply chains, in the wake of the global pandemic,” Owens explained.

“The unbalanced supply chain and need for shipping containers to be restored would mean that if the blockage is not going to be cleared in the very near future shipping companies are going to have to re-route their cargo much further south, causing delays of up to approximately 7-10 days, which in turn puts extra strain on a stretched supply chain.”

Euler Hermes likewise described the Suez Canal blockage as “the straw that breaks global trade’s back,” coming on top of supply chain disruptions since the beginning of the year that could cost real trade growth -1.4pp or roughly USD230bn of direct impact

“Suppliers’ delivery times have lengthened and are now longer in Europe than during the peak of the Covid-19 pandemic in 2020,” said Ana Boata, head of macroeconomic research at Euler Hermes.

“Importers have been grappling with a number of issues such as a shortage of containers and semiconductors, which are already hitting delivery of goods to consumers around the world. Second-round effects will be even more important as supplier input and possibly consumer prices increase,” Boata explained.

“Businesses in the UK have also have the added headache of disruption at key ports as the country adapts to the new reality outside the EU after the end of the transition period.”

The ship blocking the Suez passage is the MV Ever Given,  a Panama-flagged vessel operated by Taiwanese company Evergreen and owned by Shoei Kisen Kaisha Ltd, of Japan. It’s thought to be capable of carrying 20,000 containers, some of which may have to be removed to make the vessel lighter and easier to move.

The ship had been en route from Yantian to Rotterdam before it lost the ability to steer due to high winds and a dust storm, which caused it to run aground diagonally across part of the Suez passage.

We reported earlier this week that the Ever Given alone is thought to be carrying goods worth $89 million, with Russell analysis warning that the blockage could jeopardise the $40 billion of goods that flow between the Chinese and Dutch ports.

Currently, local authorities are using dredgers to remove material from around the ship where its bow appears to be wedged into the canal’s eastern bank, while tug boats are on hand to assist the effort.

But Owens warns that even once the Ever Given is freed, there will be a period of further disruption as the ships heading towards Europe “bottleneck” and cause a “high congestion” at their destination ports, which are already operating at a slower pace due to the extra Covid procedures in places with the shipping containers.

“There will be no clear-cut product that will be impact rather a series of products, from toys and furniture to electrical items, and the canal is a choker and a main shipping supply route,” he said. “Whatever the result will cause repercussion for a while in our supply chains.”