Analysts at Jefferies have characterised April as a largely “benign” month in terms of global insured catastrophe losses, which should help to ease the pressure on what has been a remarkably active year for catastrophes to date, with claims running at about 30% above the long-term average over the first four months.

In contrast, Jefferies estimates that April losses were actually 30% below the long-term average, with the most notable losses due to US severe weather and European winter weather.

In particular European winter weather losses were above average at $1.6 billion due to cold temperatures causing damage to crops in France and Italy. Elsewhere in Asia-Pacific and Americas (excluding the US), insured losses were below average.

Looking at catastrophe losses over the year so far, Jefferies sees the primary driver of the abnormally costly period as winter weather, with $15.3 billion of insured losses attributable to February’s polar vortex alone, which caused more losses than all other perils added together.

Moreover, putting 2021 into perspective, winter weather losses this year are already higher than even the most costly full year in Jefferies’ model for this peril. This was confirmed during the recently reported Q1 results, where natural catastrophe losses from Texan storms have been repeatedly highlighted as the material loss for the quarter. 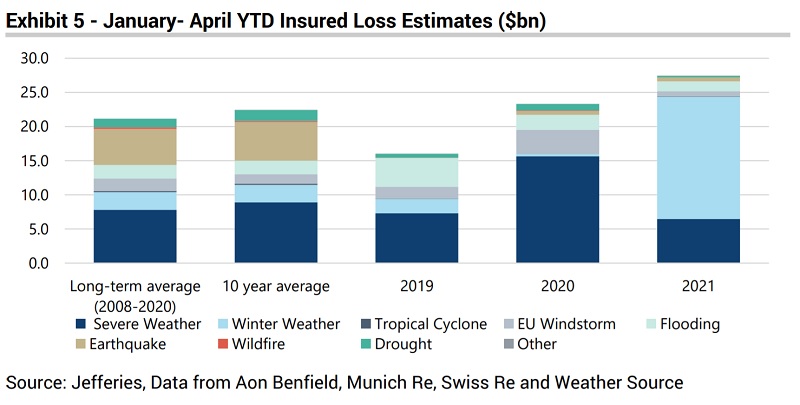 The prevalence of heavy catastrophe losses is thought to have influenced negotiations at the April reinsurance renewals, with initial broker indications suggesting favorable rate increases, particularly in Japanese Wind and Flood. One area of disappointment appears to have been India, where there apparently was some localised deflation.

Looking ahead over the next month, Jefferies expects to see broadly benign weather and catastrophe losses, as spring in the Northern Hemisphere is a typically quiet season for underwriters.

However, it warns that a potential peril to watch out for in May is the ongoing severe weather threats in Mid-Atlantic, Plains and Southeast US as a result of the prolonged hailstorms and tornadoes.