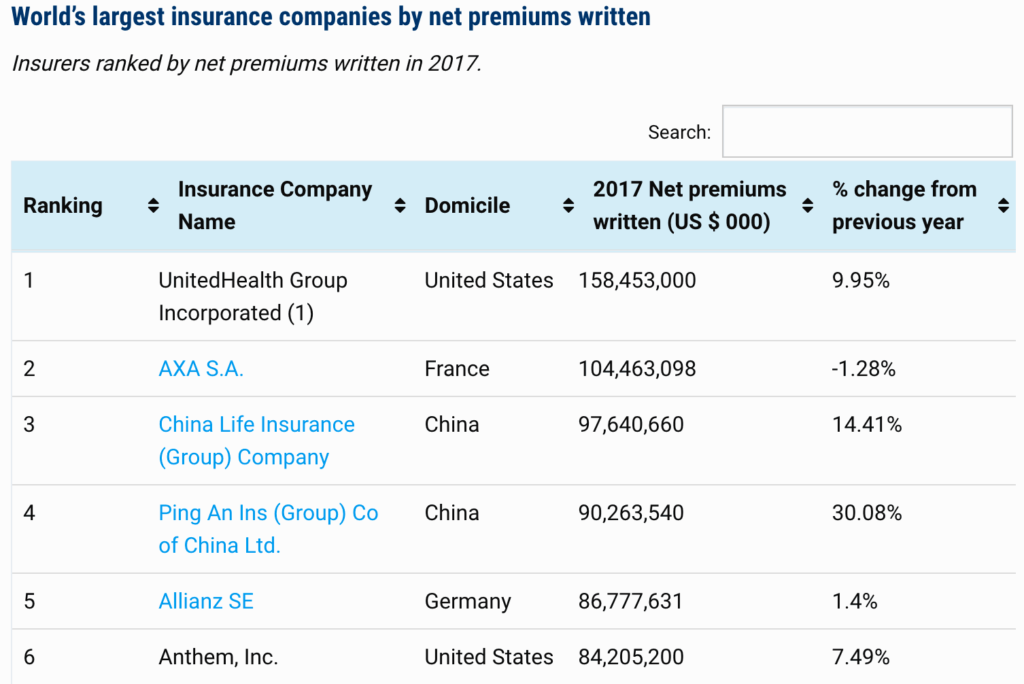 The ranking of the world’s largest insurance companies is available to view here on Reinsurance News, in collaboration with A.M. Best, as part of our suite of data products.

With the largest global insurers ranked by net premiums written and by net non-banking assets, both as of the end of 2017, and the percentage change from year-to-year available as well, the ranking provides a useful way to analyse which insurance companies are gaining stature in the global insurance marketplace.

Notable in the latest update, is the rise of Berkshire Hathaway, which has moved up from number 16 in the ranking to now stand at 11, thanks to a 33% increase in net premiums written in 2017.

Berkshire Hathaway also rose up the ranking by assets as well, now sitting at number 6 after a 13% increase in net non-banking assets during 2017.

Insurers domiciled in China are the other notable riser, helped both by the rapid growth of their domestic insurance market as well as some expansion overseas.

By net premiums written, Ping An Insurance (Group) Company of China Ltd. moved up to number 4 in the ranking from number 9 in the previous year, thanks to a premium increase of 30% year-on-year.

China Life Insurance (Group) Company showed a 14% gain in premiums written and now sits in 3rd position, while People’s Insurance Company (Group) of China Ltd. gained 10% and moved up to 10th and China Pacific Insurance (Group) Ltd. added 20% of premiums to enter the ranking at 24th.

Sitting atop the listing is UnitedHealth Group Incorporated for the fourth straight year, thanks to writing $158.5 billion in net premiums in 2017.

The biggest gainer in terms of net non-banking assets was Chinese insurer Ping An, which added 22% in 2017.

AXA S.A. sits in 2nd for both of the ranked factors, but both its net premiums and net non-banking assets declined slightly in 2017 and this insurer could find itself overtaken, at least on the premium front, when the 2018 data is available.

Our thanks to A.M. Best for collaborating with us so we can bring you this ranking of the World’s Largest Insurers.

Our other data products, which are all available under the “Data” tab in the top navigation of this website.

Rates in the downstream energy sector look set to improve in 2019 as re/insurance companies finally take a stand against...