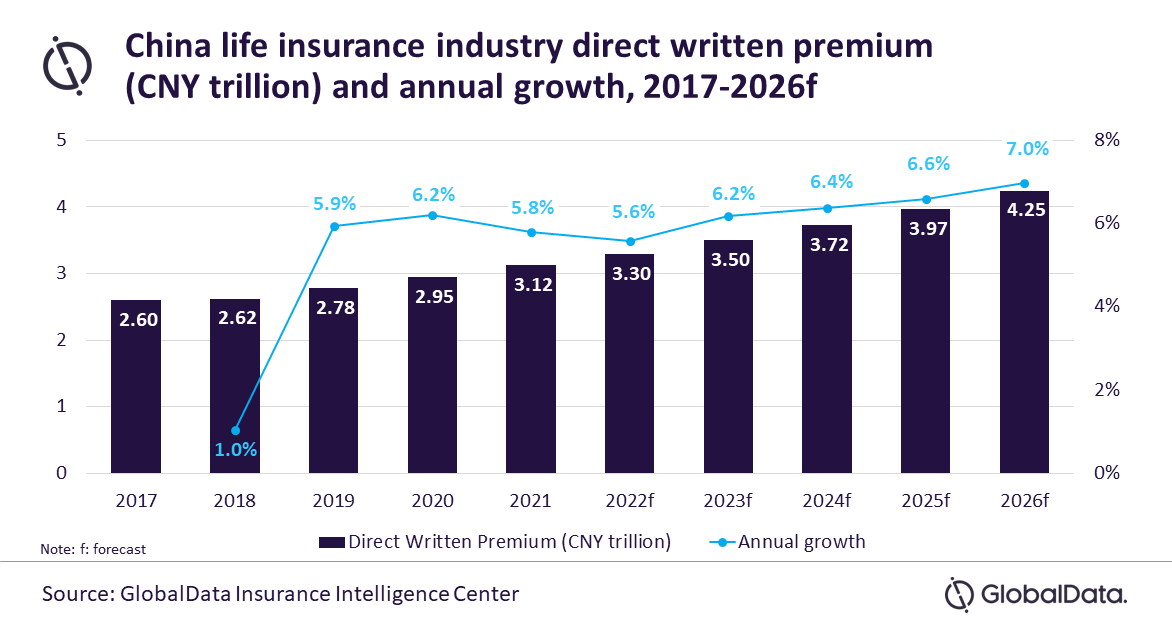 According to the data and analytics company, this growth has been supported by a recovery in the agency distribution channel and product innovations that address changing demographic requirements.

Alongside China’s life insurance industry, the Chinese general insurance market is se to grow as well, GlobalData reported in October.

Agencies and bancassurance are the main channels of life insurance distribution in China, according to GlobalData’s Global Insurance Database, which account for a 60.1% and 30% share in new business DWP in 2021, respectively.

Driven by investments from insurers to upgrade the quality of advisory services through training, the agency channel registered a 2.2% growth last year, while bancassurance recorded a 3.9% growth.

Deblina Mitra, Senior Insurance analyst at GlobalData, commented: “Agencies are the main distribution channel for whole life insurance products, which accounted for 75% of life insurance DWP in China in 2021.

“Over 85% of high net worth (HNW) investors in China prefer life insurance in their inheritance planning, which is one of the main drivers of whole life insurance. The affluent population is expected to grow at an average annual growth of 9% over the next five years, boosting the demand for life insurance.”

The life insurance industry in China also benefited from the growing demand for personal accident and health (PA&H) insurance, driven by a rise in private healthcare facilities and disposable income, noted GlobalData. Life PA&H insurance occupied a 24.5% share of the DWP in 2021, with a CAGR of 13.8% during 2017–21.

Hybrid insurance products, which combine healthcare and protection with savings, have also gained prominence in the country. Mitra added:

“Whole life and annuity insurance with riders, such as critical illness and accident, are the other examples of hybrid insurance products in China. The large middle-income population, which is expected to reach 90% by 2030, and the ageing demography in China are the key consumers of these products.”

Additionally, in April 2022 China rolled out individual private pensions as part of the third pillar of pension, to address income challenges faced by the aged population. According to GlobalData, the third pension pillar will allow individuals to contribute up to CNY12,000 ($1,872) annually, which will be tax exempted and can be invested in products such as commercial endowments from life insurers.

In addition, in 2021, many foreign insurers such as Allianz and Manulife have shown a keen interest in the pension sector especially after the foreign direct investment (FDI) cap on insurance was scrapped in the country.

Mitra concluded: “The life insurance industry in China is expected to weather the ongoing economic slowdown caused by frequent lockdowns and will expand over the next five years, aided by an influx of foreign capital.”