Cost of UK motor reinsurance to rise on back of Ogden costs: RBC

Analysts at RBC Capital Markets say that motor insurers operating in the UK are likely to face higher reinsurance renewal costs in January 2018, as the cost of the Ogden Rate change is factored in.

The Ogden Rate change is estimated to have cost insurers and reinsurers £3.5 billion in 2016, which it’s believed will result in a predicted motor premium rate increase of 9% this year.

With a significant proportion of the Ogden rate related costs having been passed onto reinsurance companies, the premium rate increase is not just down to costs borne by primary insurers, but also due to their expectations of increased reinsurance costs coming down the line.

“A large part of the total Ogden cost was passed on to the reinsurance market, and without significant prices increases in primary motor insurance, we expect the cost of reinsurance to increase,” the analysts continue.

However, the primary motor insurers may be doing their bit to try to keep costs down a little, by demonstrating that they are passing on some of the costs from Ogden to their consumers.

RBC explained; “In order to mitigate this risk, we believe that primary insurers will look to increase prices to pass the additional Ogden cost onto customers and therefore placate the reinsurance market.” 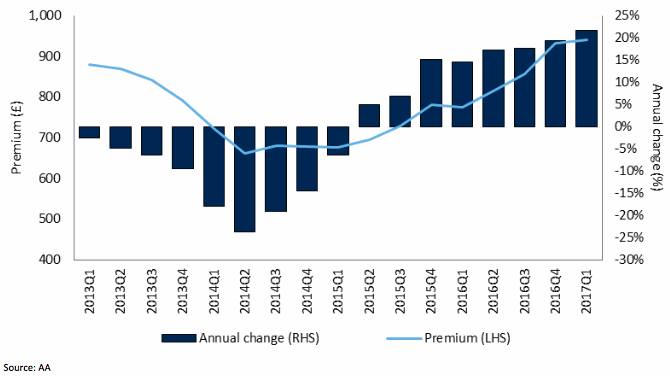