A new report from Willis Towers Watson (WTW) has found that insurtech investment worldwide totalled about $912 million during the first three months of 2020.

Additionally, the quarter saw fewer ‘mega-deals’ worth more than $100 million, with a Series D issue by Policygenius representing the only deal to enter this territory.

WTW also found that seed and Series A financing was down 9% from the previous quarter, at $223 million, but early-stage deal count rose three percentage points to 51% of all deals.

Insurtechs focused on property and casualty (P&C) insurance increased their share of total funding to 83%, which marks the largest gap with life and health funding since Q3 2016. 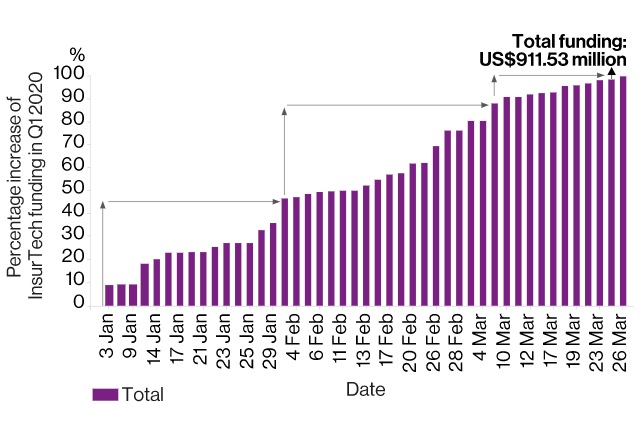 “This has been a particularly interesting quarter for global InsurTech,” said Andrew Johnston, Global Head of InsurTech at Willis Re. “It is clear that COVID-19 has had a material impact on later-stage investments, and (re)insurers are holding back.

“Despite the very large percentage drop this quarter when compared with the last, we are still seeing a huge amount of activity in early-stage funding rounds, across a very large number of deals,” Johnston continued.

“The relative downturn of (re)insurer participation in this round would explain why we have seen fewer megadeals, affecting the overall amount raised significantly, which is not surprising as (re)insurers increasingly participate in later stages. Again, COVID-19 is a likely culprit for less engagement from industry capital as (re)insurers focus their attention on other, perhaps more pressing issues.”

Stephen Jones, UK P&C Insurance lead in the Willis Towers Watson Insurance Consulting and Technology business, also commented: “Motor insurers’ focus on deploying emerging technologies has and will continue to be on operational efficiencies and customer experience across the various policy life stages, while seeking competitive advantage in areas of excellence very specific to insurance.”

“Genuinely new product forms enabled by technology, on the other hand, will logically be focused on new and existing niches,” he added. “The opportunities for insurers to use technology to enhance products and reduce costs are significant. Among incumbent insurers, reducing costs typically offers more bang for the buck than product proliferation.”

And investor Matthew Jones further stated: “We believe there are opportunities to improve the industry in pretty much all lines of business, life and non-life, personal and commercial, and across the insurance value chain, from underwriting to distribution to asset management. We also believe that there is a maturing cohort of InsurTech companies worthy of investment. We, as investors, are enablers of innovation. Entrepreneurs are the real leaders. By and large, they acknowledge that insurance is complex, and they have gained a respect for the industry.”

US commercial property and casualty insurer CNA has announced a first quarter 2020 net loss of $61 million, driven by...