International re/insurers are preparing for the impact of cyclone Debbie, which is expected to hit Australia’s North Queensland coast as a Category 4 storm on Tuesday morning local time, with reinsurance cover likely to cover some of the loss.

Currently a Category 4 storm, cyclone Debbie is expected to make landfall between Cape Upstart and Cape Hillsborough near the town of Bowen, home to approximately 9,500 residents, according to the Bureau of Meteorology. 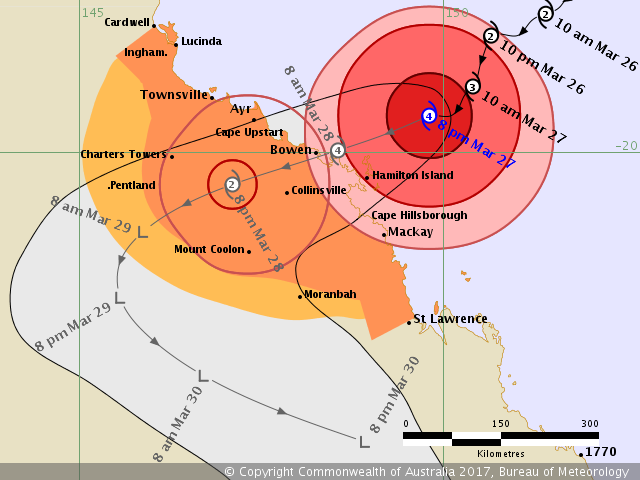 With much larger towns, such as Mackay and Townsville, also expected to be affected by strong winds as the storm makes landfall.

Cyclones can be extremely damaging and costly for insurers and as a result it’s possible that firms will call on their reinsurance cover in response to the approaching cyclone Debbie, although this will become clearer in the coming days, with Debbie expected to make landfall Tuesday morning, March 28th 2017, local time.

Australian insurer Suncorp has already released a statement advising its North Queensland-based customers to take all possible precautions as the storm approaches, while reassuring its customers that it has sufficient reinsurance protection in place to cope with any financial impact from the storm.

“Suncorp’s reinsurance protection program means it is well protected against the financial impact of Cyclone Debbie. Claims costs from the cyclone are expected to be fully covered by a combination of Suncorp’s main catastrophe program and the additional Natural Hazard Aggregate Protection that was purchased for the 2017 financial year,” said the firm.

According to the Insurance Council of Australia (ICA) cyclones make up three of the region’s top ten disasters list, which includes cyclone Yasi in 2011, which resulted in damages of AUS$1.3 billion.

Currently, cyclone Debbie has sustained winds of 102.5mph, approximately, with wind gusts to 155mph, but there is further chance of strengthening prior to landfall, warns the Bureau of Meteorology.

Insurers and reinsurers will likely be keeping an eye on the storm as it approaches the Australian coast as a strong and potentially damaging storm, with both insurance and reinsurance protection likely needed to cover the anticipated loss.

One phase of London’s PPL launch brought forwards another delayed

One of the phases of integration for the London market's PPL electronic trading platform has been brought forward, while another...