Storms Dudley and Eunice, also known as Ylenia and Zeynep, are looking set to drive insurance and reinsurance losses in the range of billions, according to industry analysts and risk modellers. 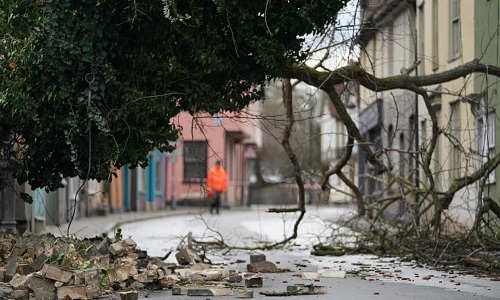 The two storms battered the British Isles in quick succession last week before tracking onwards and causing widespread damage across much of Western and Central Europe, with particularly severe impacts in Germany.

Dudley was active over February 16th and 17th, and knocked out power for more than one million people with wind gusts that frequently exceeded 80mph.

Analysts at PwC anticipate that Dudley will drive between £40 million and £75 million of insured losses in Britain alone, while actuarial consultancy Meyerthole Siems Kohlruss (MSK) believes the costs in Germany could be around €500 million.

Mohammad Khan, PwC UK’s leader of general insurance, says most of the losses will stem from damage to homes, commercial offices and vehicles from falling trees and flying debris.

But Onnen Siems, Managing Director of MSK, added that, despite the magnitude of the expected losses from Dudley/Ylenia, the damage should be distributed fairly evenly across the market, meaning reinsurance programs are unlikely to be triggered.

However, reinsurers could be looking at a different picture with Storm Eunice/Zeynep, which followed on two days from Dudley/Ylenia, bringing even stronger winds that frequently exceeded 100mph and caused far more extensive damage.

And in Germany, MSK sees the insured loss as being around the €900 million mark, with damages comparable to what had been seen following Storm Friederike in 2018.

Siems warned that Zeynep could even approach Friederike’s eventual insured loss total of €1.2 billion depending on the inflation rate and increases in construction prices.

Combining these estimated costs of the two storms across the UK and Germany, and factoring in the impact across other parts of Europe, it thus seems quite probable that the insurance and reinsurance industries will be facing a multi-billion loss from this recent spell of severe weather.

And with another named storm – Franklin – having already caused further catastrophe flooding in the north of England and Ireland, and further losses forecast from an approaching Storm Gladys later this week, re/insurers could be set to see losses climb higher yet.

Moody’s analyst Dominic Simpson warns that Dudley, Eunice and Franklin together could cost UK insurers more than £400 million in claims, although the rating agency does not expect the storms to have a significant negative impact on individual insurer performance.

“Considering the impact on insurers of similar-sized storms in the past, we believe that whilst denting their weather loss budgets, UK insurers on the whole should be able to comfortably absorb these losses within their earnings during 2022,” Simpson assured.