With the peak of the Atlantic hurricane season approaching uncertainty remains for European reinsurers driven by the potential for large losses, but with annual catastrophe budgets being relatively high, only the most severe loss event would start a turn in the market, according to RBC Capital Markets.

Based on historical data, September is the peak of the Atlantic hurricane season, and with forecasters warning of an above-average level of activity, it’s an uncertain period for global insurers and reinsurers.

As highlighted by the chart below, provided by RBC, for Hannover Re, SCOR, Swiss Re, and Munich Re, the level of capital at risk during the 2017 Atlantic hurricane season, individually, is significant.

“Atlantic hurricane season remains a period of great uncertainty for the reinsurance companies as the potential for large losses hangs over the sub sector.

“If losses end up being light, then results for the year are likely to be strong. However if losses are high then earnings are likely to suffer,” explains RBC.

Despite noted uncertainty and the expectation of an above-average level of activity during the 2017 Atlantic hurricane season, the reinsurance companies still have the majority of their annual catastrophe and large loss budgets to call upon, according to RBC analysis.

“As a result, we believe only a very large loss would lead to a widespread correction in prices. A collection of medium sized losses, however, could lead to some localised price increases, in our view,” says RBC. 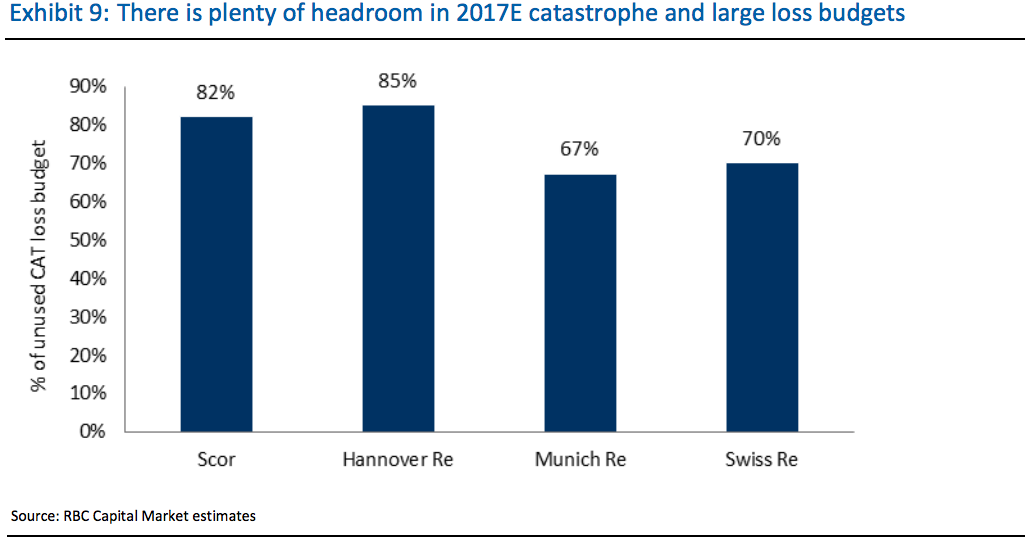 As shown by the above chart, provided by RBC, Munich Re (67%) and Swiss Re (70%) have lower remaining annual cat budgets than SCOR (82%) and Hannover Re (85%), but overall, there’s enough room to absorb losses throughout the remainder of 2017.

As a result, and owing to the high levels of both traditional and alternative reinsurance capital in the market, it would take a truly significant loss event to turn pricing in the sector, while an aggregation of medium-sized losses could impact pricing at a local level, says RBC.

RBC continues to explain that within the non-life sector, reinsurance is still the most challenged segment, with returns continuing to fall with little sign of change anytime soon.

“However with strong balance sheets and well covered capital returns, we continue to see value in the larger reinsurers,” says RBC.