Analysts at J.P. Morgan have estimated that the Genoa bridge collapse will result in an insurance industry loss of up to €600 million (US$685 million), driven primarily by property damage and business interruption (BI) losses. 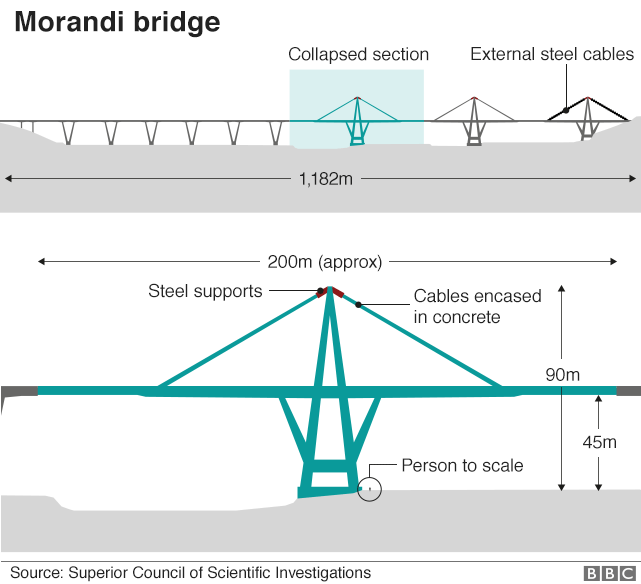 Provided by the BBC. Source: Superior Council of Scientific Investigations.

Amid extremely heavy rainfall, a 200m section of the Morandi bridge, which is the main road of Genoa and which connects it to the A10 motorway and the road to France, fell 45m last week, claiming the lives of at least 43 people and resulting in widespread damage.

In a recent note, J.P. Morgan estimates that the bridge collapse will result in an insurance industry loss of between €400 million and €600 million (US$457 million and US$685 million), based on news reports and the current available information on the insured loss.

According to analysts, there are two main exposures. The first being property damage for the bridge, and the second being BI for the toll operator. Furthermore, analysts state that there is insurance exposure in terms of liability cover, life insurance, and also motor insurance.

“Finally, there may be cover for business interruption for the railway line. Because the cause of the accident is not yet known, and because the insurance cover is complex, our estimates of the insured loss are at this stage tentative,” say analysts.

However, analysts continue to state that they believe the various policies are capped, which is why overall, despite the insured loss being potentially large, it’s unlikely to have a material impact on the earnings of three re/insurance groups noted previously by Versicherungsmonitor as being exposed to the loss.

The three players in question are Allianz, Swiss Re, and Talanx (the parent of reinsurance giant Hannover Re).

Once rounded to the nearest 0.5%, analysts note that these figures are 1%, 0.5%, and 2% of their 2018 expected EBIT estimates, respectively, for the three companies.

J.P. Morgan’s estimates are based on assumptions that the insurance protection is capped. Analysts assume that Allianz has less than a 10% share of the total insured loss, that Swiss Re’s Corporate Solutions arm led the contract but that this is capped, and that Talanx, including Hannover Re, has limited exposure, in line with its market share in Italy commercial lines insurance and reinsurance.

“We estimate the insured loss is not material in terms of the full year earnings (ie under 5%) of these insurers and it does not change our investment case for any of these three groups,” say analysts.