Onshore property insurance market losses in the United States and Caribbean will be close to $9 billion, according to an estimate from Karen Clark & Company (KCC). 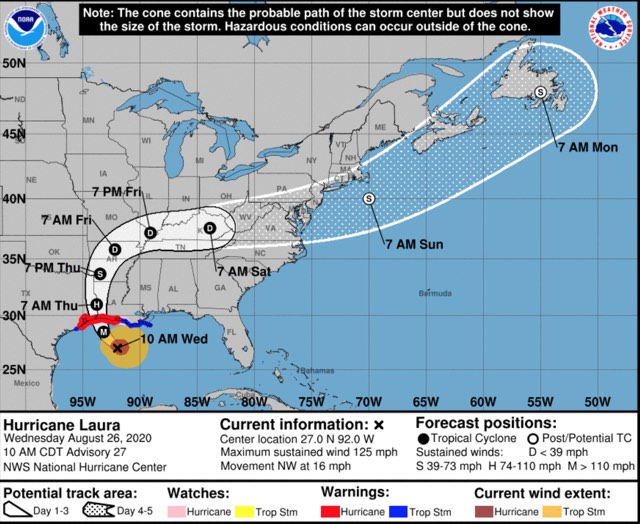 Karen Clark & Company’s industry loss estimate includes $8.7 billion of insured losses in the U.S., driven by hurricane Laura’s wind and storm surge impacts, as well as $200 million for damage in the Caribbean.

It follows an estimate from AIR Worldwide that onshore insured property losses from recent hurricane Laura will fall between $4 billion and $8 billion.

As well as an estimate at the end of last week from CoreLogic, that insured wind and storm surge losses for residential and commercial properties in Louisiana and Texas would be between $8 billion and $12 billion.

KCC explained that included in its estimate are privately insured wind and storm surge related damage to residential, commercial, and industrial properties, as well as insured damages to automobiles.

It does not include National Flood Insurance Program (NFIP) losses, or any losses suffered to offshore assets.

In addition, KCC has not factored in any potential impacts on losses due to the ongoing COVID-19 pandemic.

Hurricane Laura made landfall in Louisiana with 150 mph Category 4 winds on August 27th, the strongest in Louisiana since the 1856 Last Island Hurricane.

KCC notes that losses are not expected to be as high as they perhaps could have been, as Laura’s highest wind speeds were tightly wound around the hurricane’s center, resulting in a narrow swath of extensive damage. While the storm surge impacts were less than forecasted and originally modelled as the peak surge was only around 15 feet, below the 20 foot NHC prediction.

Hurricane Laura brought tropical storm force winds to multiple islands across the Caribbean, causing tress to be downed and power outages across Hispaniola and Cuba. Light wind damage was seen to roof coverings and other exterior elements, while most structural damage was the result of downed trees.

In the United States the damage was more extensive, in particular to an area along the western Louisiana coast that extended up to Lake Charles.

Damage in this area has been extensive. Structural damage has occurred to all types of properties, including wood frame homes and commercial structures. Damage to roof coverings, decking, and trusses has been widespread. Exterior siding, opening, and glazing damage have been extensive, and typically followed by progressive damage from water and wind infiltration. In addition to downed trees and signs, telephone poles have snapped, resulting in infrastructure disruption.

Even though the worst-case scenario storm surge did not materialize, significant flooding occurred in coastal areas. Due to extensive debris accumulation, roads have become impassable, delaying cleanup efforts in the most impacted areas.

Further industry loss estimates are likely to emerge in the coming days and while they are challenging to compare, given the differences in what’s included within each, they are beginning to point towards a total insurance and reinsurance market loss of somewhere up to, or perhaps slightly over, $10 billion.