John Doyle to succeed Peter Zaffino as CEO of Marsh 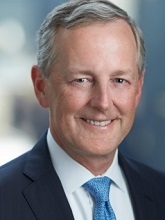 Doyle’s appointment is effective immediately, and he will report to President and CEO of Marsh & McLennan, Dan Glaser, and will continue to serve on the firm’s Executive Committee.

Doyle, joined Marsh as President in April 2016 from insurer AIG, where he was CEO of the firm’s global insurance businesses. Prior to this Doyle served as President and CEO of Chartis U.S., and is also a member of the Board of the New York Police and Fire Widows’ & Children’s Benefit Fund, and a Trustee of the Inner-City Scholarship Fund.

“Today’s appointment delivers on our strategic commitment to having the deepest and most talented executive leadership team in the industry.”

Doyle succeeds Zaffino, who served as CEO of Marsh since 2011, and who was recently announced as AIG’s new Global Chief Operating Officer (COO), effective August 1st, 2017.

“On behalf of our colleagues and Executive Committee, I want to thank Peter Zaffino for his meaningful contributions to our firm. We wish him continued success in the next phase of his career,” said Glaser.

Marsh & McLennan has also announced that Peter Hearn, President & CEO of reinsurance broker Guy Carpenter, is to join the firm’s Executive Committee, and will report directly to Glaser, effective immediately. Furthermore, the role of Chairman of Risk and Insurance Services, which was held by Zaffino since 2015, will not be filled.

Glaser, added; “Peter Hearn is a highly accomplished and talented executive. I welcome him to Marsh & McLennan’s Executive Committee.”

Swiss Re has partnered with Chinese property and casualty insurer, Ping An, to offer China's first ever mobile-enabled parametric cover...