Rising loss cost inflation among U.S. homeowners insurers is expected to result in shrinking margins for the group throughout 2017, but large rate increases may be fended off thanks to the stabilising effect of cheaper property reinsurance.

Higher severity losses in the U.S. homeowner insurance market, excluding the impact of catastrophes, have driven loss cost inflation higher for the sector, according to analysts at Keefe, Bruyette & Woods.

The analysts estimate that fourth-quarter 2016 loss cost inflation hit 6.3%, with severity losses up an estimated 580bps and frequency up 70bps. 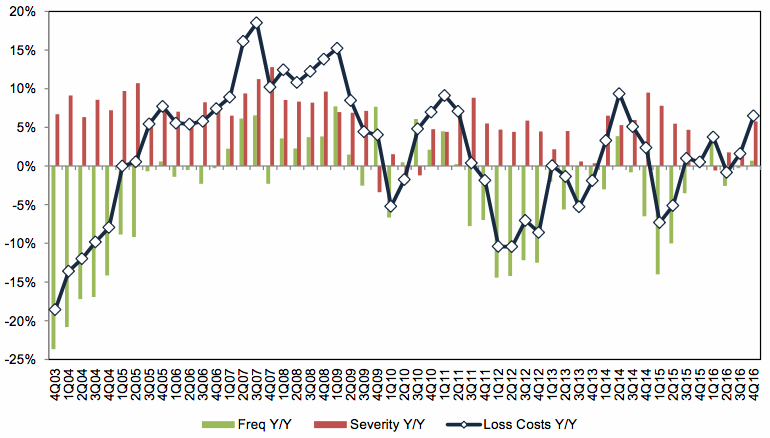 Including the impacts of catastrophes, KBW’s see paid frequency losses up by a huge 17.9%, showing where the impact of severe weather struck the sector as well as losses due to events such as hurricane Matthew.

But despite the increasing loss cost inflation and rising loss experience of U.S. homeowner insurance firms the analysts do not expect steep increases in insurance rates at this stage, largely due to the continued decline in property reinsurance rates.

With property reinsurance and property catastrophe reinsurance both abundant and almost as cheap as they have ever been, access to this low cost reinsurance coverage is set to help insurers manage increased claims costs and keep their pricing keen for consumers.

Margin erosion in a bad loss year is no surprise among homeowner insurance companies, but typically it would result in rate increases being passed onto consumers.

Now, with reinsurance capital priced at levels near historic lows this isn’t always the case anymore and price rises passed to consumers should be lower and price rises less frequent.

KBW’s analysts expect that near-term profitability of homeowner insurers in the U.S. should remain more than adequate as a result, with reinsurance one of the factors driving greater stability.