Insurers and reinsurers operating in the property & casualty (P&C) arena have, during the softening cycle, utilised higher reserve releases to bolster dwindling underwriting returns. However, with the re/insurance landscape remaining under significant pressure, analysts at Morgan Stanley have warned of a ~$2.5 billion P&C sector reserve deficiency.

Morgan Stanley notes an estimated actuarial reserve range of $586 billion to $619 billion, with industry carried reserves of $600 billion, which falls roughly $2.5 billion below the midpoint of its estimated reserve range.

Meaning that analysis of reserve practices in 2016 shows a $2.5 billion P&C industry reserve deficiency, the first time since Morgan Stanley has estimated an industry-level reserve deficiency since its first reserves study in 2009. 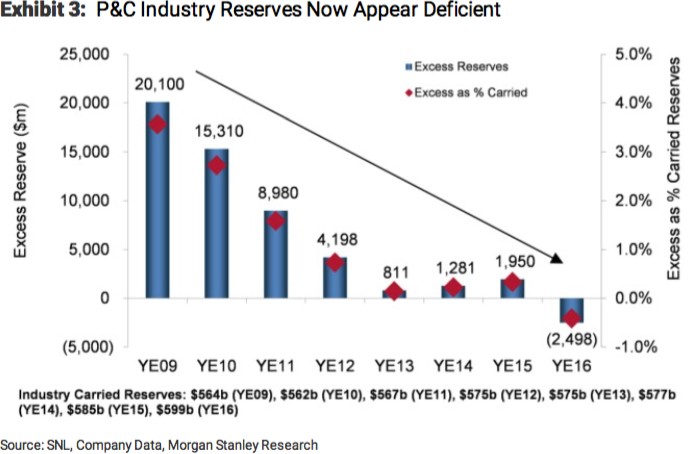 The above chart shows the decline in excess reserves from 2009, with P&C industry reserves now appearing to be deficient. Furthermore, Morgan Stanley explains that its analysis reveals that all major reserve lines are now deficient, resulting in an overall, year-on-year deterioration of $4.5 billion.

As mentioned earlier, some insurers and reinsurers have been releasing higher levels of reserves to boost quarterly and annual earnings results during the softening landscape, and according to Morgan Stanley reserves contributed roughly $60 billion to sector earnings in 2010 to 2016, and approximately 20% of industry operating earnings.

However, with reserves running thin and losses on the rise, in more recent times, it’s expected that P&C market players will be less able to call on reserves to improve earnings, a trend highlighted by the below chart. 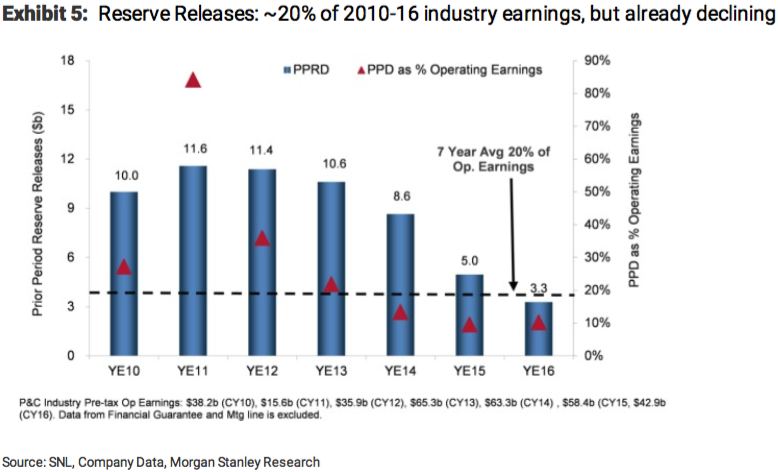 As a result, Morgan Stanley expects reserve releases to slow in the future across the P&C industry in response to the deficient reserve cushion. 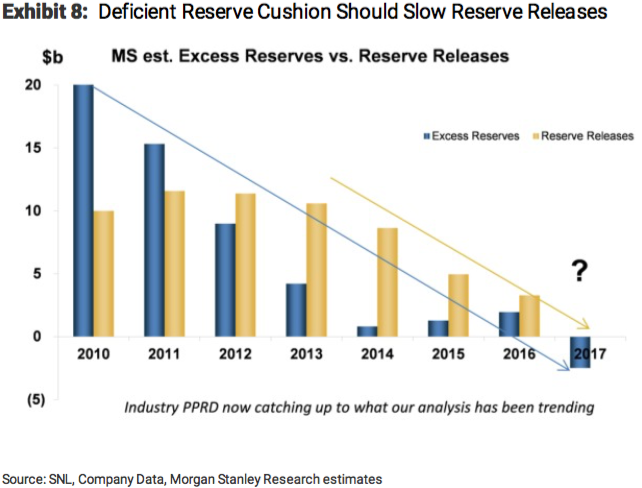 It could be that the reserve environment and market cycle is at an inflection point, suggests Morgan Stanley, a notion put forward by reinsurance broker JLT Re in September of last year.

Around this time last year Morgan Stanley analysts warned that the reserve trend would likely end one of two ways, being a decline in reserves that results in lower earnings over the next five years, or further reserve charges being taken.

It will be interesting to see how much reserves contribute to individual and industry P&C earnings in 2017 as challenging, softening market conditions persist, and the potential for large losses remains. Efficiency and discipline remain key for insurers and reinsurers in the P&C sector, and absent a turn in the pricing environment an inability to bolster returns with reserves could come back to hurt some firms in the current market cycle.

GBGI Limited, also known as Global Benefits Group, a group focused on provision of international benefits insurance and based in...