After taking the top spot last year, global reinsurer Munich Re remains the world’s largest reinsurance company, with gross life & non-life reinsurance premiums written of more than $46.8 billion in 2021, as shown by our directory of the Top 50 Global Reinsurance Groups. 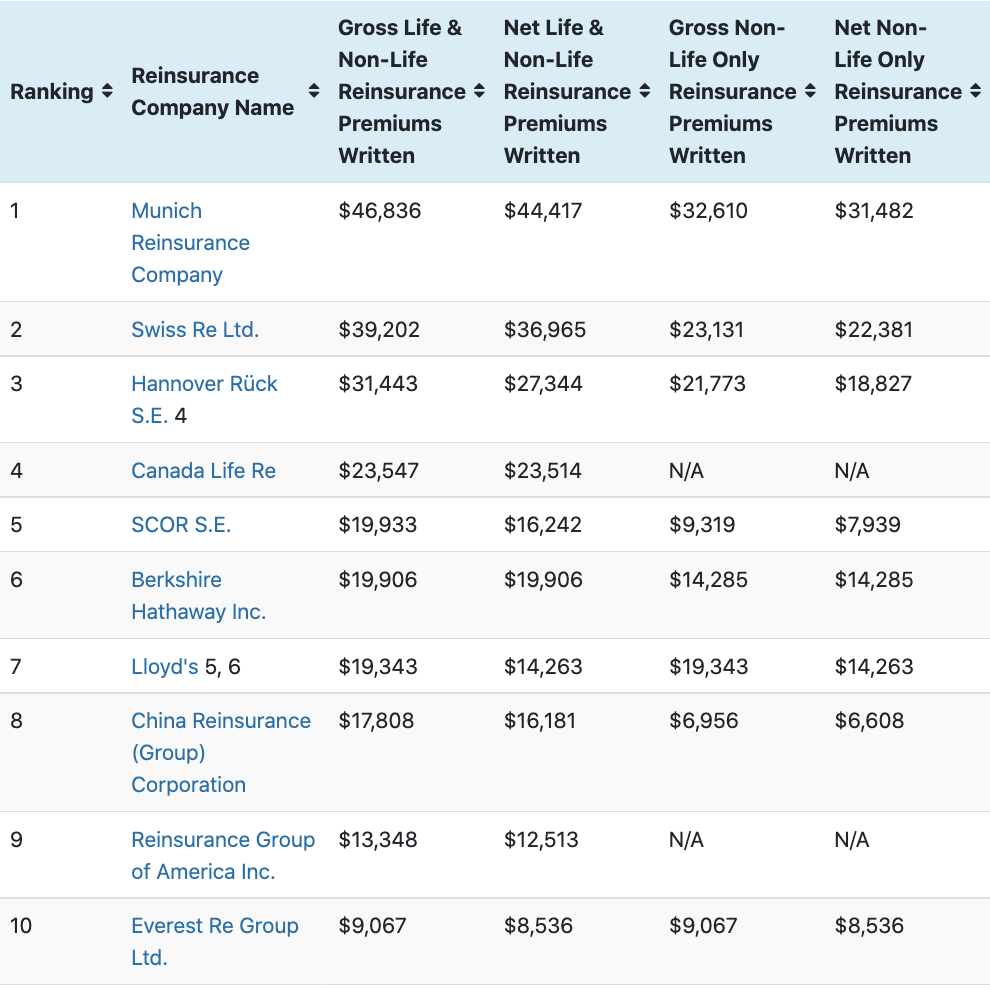 The directory is based on research data from ratings agency AM Best, and ranks companies by unaffiliated gross premiums written (GPW) in 2021.

It shows that after year-on-year growth of roughly 2%, Munich Re continues to sit above the rest, and is once again the only firm to report annual GPW of more than $40 billion, and by some way at approximately $46.8 billion.

Munich Re claimed the number one position last year after AM Best excluded primary insurance premiums in the rankings.

Fellow, large European reinsurers, Swiss Re and Hannover Re, also grew in the period. Swiss Re remains second on the list with growth of more than 7% resulting in GPW of $39.2 billion.

Hannover Re’s growth was less dramatic in the period, at roughly 3%, but with GPW of $31.4 billion, the reinsurer held on to third place in 2021.

However, SCOR, the final of Europe’s big four reinsurers, saw its GPW retract by almost 1% to $19.9 billion, which led to a drop from fourth to fifth on the list for 2021.

Canada Life Re, eighth in 2020, moved up four places to take the number four position from SCOR, after impressive growth of nearly 62% saw the firm report 2021 GPW of $23.6 billion. In fact, AM Best notes that this is the only time a solely life reinsurer has made the top four.

In sixth place sits Berkshire Hathaway with 2021 GPW of roughly $19.9 billion, representing year-on-year growth of around 3.5%. Despite the expansion in gross reinsurance premiums, Warren Buffett’s firm did fall one place on the list.

As in 2020, the specialist Lloyd’s insurance and reinsurance marketplace is seventh on the list for 2021, with robust GPW growth of 17% to $19.3 billion. The market actually reported premium growth of more than 10% in all of its reinsurance segments in 2021.

For 2021, life reinsurance company, Reinsurance Group of America (RGA), and Bermuda-based Everest Re complete the top ten, in ninth and tenth place, respectively.

RGA, who was also ninth in 2020, reported 2021 GPW of $13.4 billion, representing year-on-year growth of more than 6%. Everest Re actually moved up one place to tenth, following strong growth of roughly 25% to GPW of more than $9 billion.

“Many of the reinsurance companies AM Best rates reported that a third to half of their premium growth could be attributed to pricing increases, not exposure growth. Rate increases in many of the reinsurance lines are expected in 2023, although they will vary by line of business and territory. However, growth could be countered by reductions in property cat reinsurance premiums, as many companies have begun to withdraw or substantially reduce their participation in that market,” says AM Best.