Reinsurance firm Munich Re believes that global insurance markets are set to face brighter growth prospects over the next few years, with “slightly increased growth” expected by 2018.

Overall, Munich Re believes that the primary insurance sector will grow by 4.5% per annum on average (3.0% adjusted for inflation) in 2017 and 2018.

The reason for the better growth is a brighter outlook for the global economy, according to the reinsurer, with improved economic prospects in the USA and emerging markets offsetting any negative factors such as declining growth in China.

Over a longer horizon, Asian emerging markets offer the greatest growth potential, Munich Re says, with their share of primary insurance premiums expected to equal those of Western Europe within just a few years.

“Premiums in the insurance sector are therefore likely to evolve in line with the global economy, which should show real growth of 2.9% in 2017 and 3.1% in 2018,” the reinsurer explained this morning. “Projected premium growth will thus be slightly higher than that of 2016, and significantly exceed the average growth rate of almost 2% for the past ten years.”

Premium growth in insurance over 2017 is expected to be only nominal, but then picking up in 2018 as the effects of greater economic growth feed through, resulting in an anticipated 3% rate of real premium growth.

Michael Menhart, Chief Economist at Munich Re, commented; “The economies of many emerging markets, such as Brazil, but even Russia, are experiencing a significant recovery. This is leading to increased growth in property-casualty insurance. In most of the industrialised world – in the eurozone, the USA, and Japan – demand has been bolstered by a solid economic environment.”

Menhart explained; “We project that life insurance there will see only marginal growth owing to the low- interest-rate environment. By contrast, demand in the emerging markets will continue to rise appreciably. Growth prospects for insurers are therefore looking a little brighter worldwide.”

However property and casualty premium growth is likely to increase more rapidly in future years, as new business opportunities open up and the effects of companies changing their business models begin to pay dividends.

Over time, Munich Re expects that emerging markets will contribute an increasing share of premiums, with additional premium volume from these markets expected to rise from 20% in 2016 to as much as 47% by 2025.

By 2025, the reinsurer expects that Asian emerging markets alone will reach 21.4%, close to that of Western Europe (24.5%). However North America is expected to remain clearly in the lead at 27.8%. 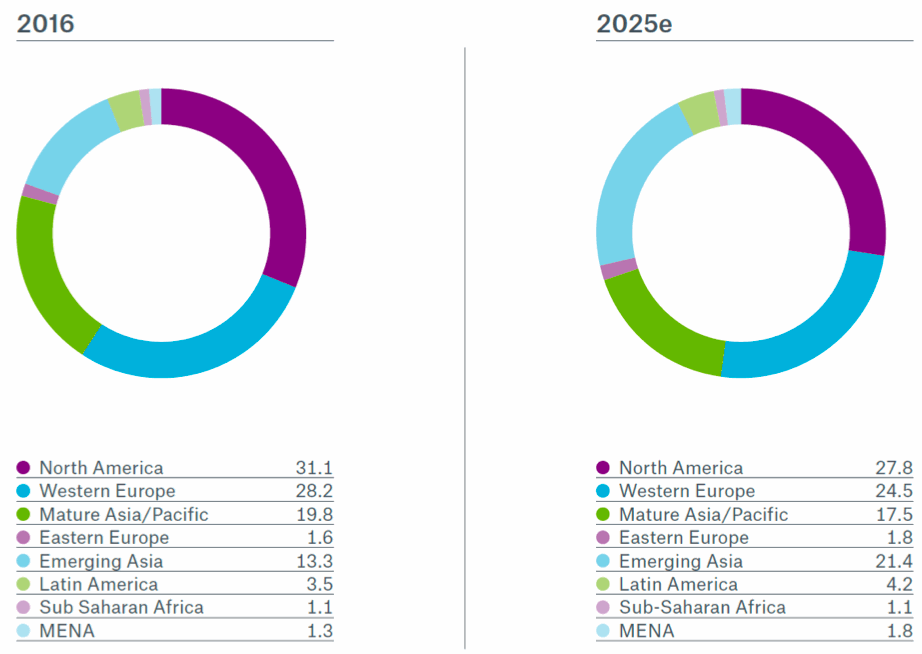 Regional distribution of total primary insurance premiums in 2016 and 2025, in % – Source: Munich Re

Growth in insurance markets will translate into increased need for reinsurance capital to support the growth and emerging market development.

Global insurer and reinsurer XL Catlin has increased its available terrorism insurance coverage limits in the U.S. by 25% to...