Forecasters with the National Oceanic and Atmospheric Administration’s (NOAA) Climate Prediction Centre have said there’s a 60% chance of an above-normal Atlantic hurricane season, which officially starts on June 1st, 2020. 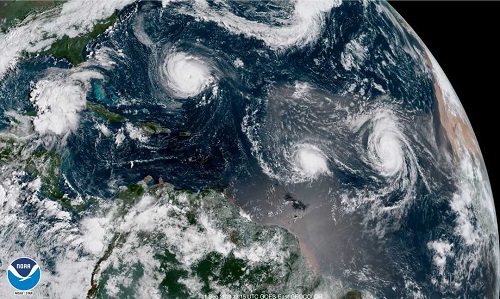 Analysis conducted by the NOAA reveals that multiple climate factors indicate that an above-normal level of activity is most likely for the upcoming Atlantic hurricane season.

The announcement from the NOAA follows the formation of tropical storm Arthur on May 16th. The storm formed off the coast of Florida and its arrival meant that for the sixth consecutive year, the Atlantic hurricane season started early.

The NOAA’s Climate Prediction Centre is forecasting a likely range of 13 to 19 named storms, of which 6 to 10 could become hurricanes, including 3 to 6 major (Cat 3, 4, or 5) hurricanes. In comparison, an average hurricane season sees 12 named storms, 6 hurricanes, and 3 major hurricanes. The NOAA says that it provides these ranges with 70% confidence.

Commenting, Secretary of Commerce, Wilbur Ross, said: “As Americans focus their attention on a safe and healthy reopening of our country, it remains critically important that we also remember to make the necessary preparations for the upcoming hurricane season. Just as in years past, NOAA experts will stay ahead of developing hurricanes and tropical storms and provide the forecasts and warnings we depend on to stay safe.”

The NOAA also highlights numerous climate factors that are responsible for its above-normal forecast, including the fact that El Nino conditions, which suppress hurricane activity, are expected to remain neutral or possibly trend toward La Nina. Additionally, warmer-than-average sea surface temperatures in the Tropical Atlantic Ocean and Caribbean Sea, as well as reduced vertical wind shear, weaker tropical Atlantic trade winds, and an enhanced west African monsoon season all raise the likelihood, says the NOAA.

“NOAA’s analysis of current and seasonal atmospheric conditions reveals a recipe for an active Atlantic hurricane season this year. Our skilled forecasters, coupled with upgrades to our computer models and observing technologies, will provide accurate and timely forecasts to protect life and property,” said Neil Jacobs, Ph.D., acting NOAA Administrator.

Carlos Castillo, acting deputy administrator for resilience at FEMA, said: “Social distancing and other CDC guidance to keep you safe from COVID-19 may impact the disaster preparedness plan you had in place, including what is in your go-kit, evacuation routes, shelters and more. With tornado season at its peak, hurricane season around the corner, and flooding, earthquakes and wildfires a risk year-round, it is time to revise and adjust your emergency plan now.

“Natural disasters won’t wait, so I encourage you to keep COVID-19 in mind when revising or making your plan for you and your loved ones, and don’t forget your pets.”

Of course, for property insurers and reinsurers it’s the hurricane landfalls that pose the greatest threat. Numerous 2020 Atlantic hurricane season forecasts have now suggested that it’s likely to be an above-average season for activity, so re/insurers will be keeping a close eye on developments.

As a result of storms in prior years and the impacts of the prolonged softened market, reinsurance rates had started to move in a positive direction in 2019 with further, potentially more meaningful rate increases expected at the upcoming June 1st renewals, which focus on the Florida market.

Considering the fact COVID-19 is expected to support rate hardening, a major hurricane landfall, or a series of large hurricane landfalls in 2020 could have a meaningful influence on reinsurance rates ahead of the January 1st, 2021 renewals, potentially leaving some regional insurance companies with additional headwinds.

Re/insurance broker Willis Towers Watson (WTW) has announced the appointment of Johan Forsgård as the leader of its new Nordics...