Property Claim Services (PCS), a Verisk Analytics business, has officially designated the riots in Minneapolis, Minnesota (MN) as a catastrophe, and warned of the potential for large industry losses as unrest threatens to engulf other states. 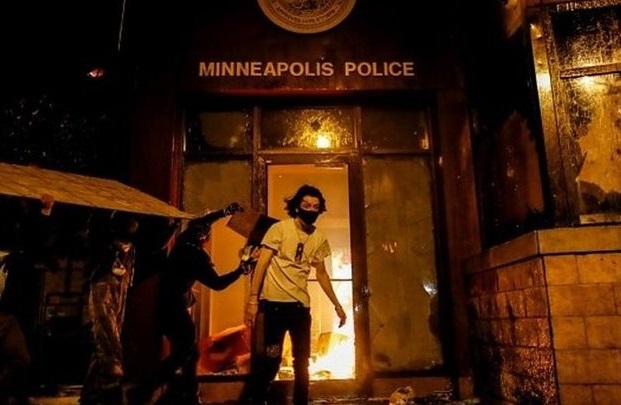 However, after a series of confrontations with police the protests became more violent, with hundreds of buildings being vandalized or looted.

And the movement has only grown in size and intensity over the past few days, with demonstrations springing up across the US and even in parts of Europe.

Arguably the worst race riots in the U.S. since the 1960s, on Sunday evening curfews were in place across 40 American cities in some 23 states.

So far, the riots have claimed at least five lives and as evidenced by news reports from across the country, there’s been some fairly sizeable damage to numerous buildings and businesses.

The situation in Minneapolis is the first event to be designated as a riot and civil disorder event by PCS since the Baltimore riots of 2015, and could become the first to include more than one state.

Historically, riot catastrophes in the US have had relatively low insured losses industrywide, with the twelve previous events recognised by PCS driving combined losses of less than $1 billion, most of which stemmed from the 1992 LA riots.

However, Tom Johansmeyer, Head of PCS, warned that there are reasons to remain cautious with the riots we’re currently seeing, even if there is only one historical event with several hundred million dollars in insured losses.

For example, there is the danger that disproportionately large losses could come from a handful of large retailers’ property programs, as was the case in the 2019 Chile riots, which produced industry losses of more than $2 billion.

“When you look at the United States, riot and civil disorder may generally look like a sub-US$100 million risk, although with the potential for much greater losses,” Johansmeyer explained.

“But, when you add a handful of large national or international companies with losses of more than US$100 million each, you could see a much larger industry loss begin to materialize. The large losses within the catastrophe could change the character of the overall event.”

There was a similar dynamic in the political violence loss in Turkey in 2016, which was one of the largest insured losses since at least 1999, according to PCS Turkey data, in large part because of some large energy account losses included in the event.

“So far, the fact that Target closed approximately 9 percent of its stores, across 13 states, shows the potential for large property risk programs to contribute to the catastrophe,” Johansmeyer continued.

“And that’s where it makes sense to look at the losses sustained by Falabella, Wal-Mart, and others in Chile last year. Of course, Target is based in Minnesota and may have a higher concentration of stores there. So, at a minimum, it might make sense to look at the other cities affected, see which retailers are named in news reports, and get a sense of their concentrations in the cities that have been reported as affected by the riots over the weekend.”

PCS is also anticipating challenges regarding the event definition of the riots for reinsurance, as policies may require riots to be in contiguous states or counties to be considered one event.

“If the riots in cities outside Minnesota caused sufficient physical damage to warrant catastrophe extension by PCS, then there could be coverage mismatches within the global reinsurance market,” Johansmeyer noted.

“The notion that geographical contiguity is required for riot does seem a bit dated. Global 24/7 broadcast and online news enable the rapid transmission of both information and sentiment rapidly, where in the past, fervor may have subsided as word of mouth was the fastest way for the latest updates to move from one village to the next.”

The InsuResilience Solutions Fund is set to support the efforts of the Microinsurance Catastrophe Risk Organisation (MiCRO) and SBS Seguros...