The number of structures destroyed by the recent outbreak of wildfires in California has risen to 18,652 as containment grows and authorities begin to piece together the extent of the destruction. 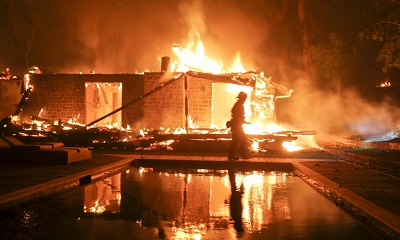 A firefighter walks by a burning home in Malibu. Source: Ringo HW Chiu/AP

The property toll has risen by another 20% overnight, up from 15,489, with the implication being that losses for the insurance and reinsurance industries will continue to grow alongside it.

Catastrophe risk modelling firm RMS released a loss estimate for the wildfires yesterday that put industry losses in the range of $9 billion to $13 billion.

However, with the level of property destruction continuing to increase at a rate of thousands of structures every day, the final loss total is likely to be at the upper end of this range, perhaps even exceeding it.

The number of structures destroyed will likely continue to increase over the coming days as the process of assessing the damage gets underway, rather than due to fresh burns.

Most of the destruction was caused by the Camp Wildfire in Butte County, which has now destroyed 12,637 single residences, 310 multiple residences, 483 commercial properties, and a further 3,718 minor structures, according to the latest data from the California Department of Forestry and Fire Protection (Cal Fire).

The Camp Fire became the most destructive and deadliest wildfire in California’s history after completely devastating the town of Paradise on November 8, causing 79 deaths at present count, with more than 1,000 people still missing.

It has burned through 151,373 acres and continues to threaten 14,500 structures despite containment now reaching 70%.

Further south, the Woolsey Fire, which continues to burn through the Ventura and Los Angeles Counties, has now destroyed 1,500 structures and damaged another 341, many of which are in the affluent region of Malibu and include buildings and locations used in the film and television industries.

The Woolsey Fire has burned through 96,949 acres, but is now 96% contained and does not currently pose a threat to any more structures, according to California authorities.

The combined total of properties destroyed by this recent outbreak is also higher than the collective destruction cause by the Tubbs, Nuns, Atlas and Thomas Wildfires in October and December 2017, which between them are estimated to have driven somewhere around $13 billion in insured losses.

That suggests the current industry loss estimates for this outbreak will prove to be too low, given the number of properties known to be destroyed was much higher.

Auto and vehicle losses from the wildfires also remain uncertain at present but are sure to drive further losses for the insurance and reinsurance industries, in addition to business interruption, contents claims and additional living-expense claims for those who have lost their homes.

Equipment belonging to energy supplier Pacific Gas and Electric Company (PG&E) still remains under scrutiny as a potential cause for the Camp Wildfire, and will likely erode all of its $1.4 billion of insurance protection if found liable, including its $200 million Cal Phoenix Re catastrophe bond.

The captive insurance markets in Bermuda, the Cayman Islands and Barbados (BCIBs) continue to post strong double-digit RoEs and outperform...