Rate hardening to persist through 2022, says Swiss Re

According to key market conditions identified by global reinsurer Swiss Re, price rises are expected to continue both this year and next, further increasing the profitability of new business. 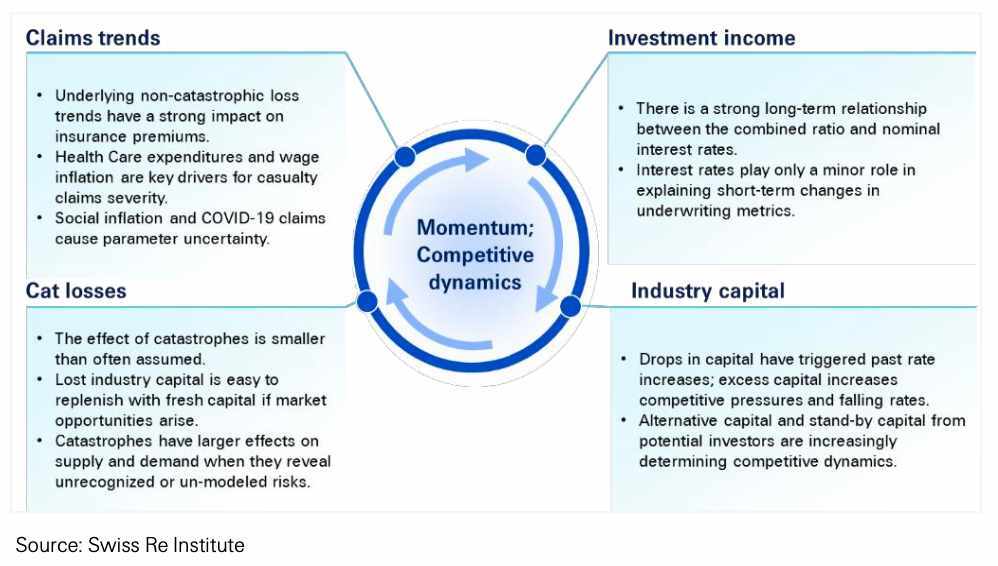 For example, Swiss Re notes how re/insurance rates have been hardening since 2018, with price momentum having picked up at this year’s January renewals.

While the market is one currently defined by tighter capacity, analysts say this is driven by a reduced risk appetite on the re/insurer’s end, rather than a shortage of capital per se.

This reduced appetite is said to be driven by an environment that has been rife with uncertainty, ambiguity and volatile capital markets.

According to data from Aon, global reinsurance incumbents and a few new players raised close to $15 billion of capital in 2020 to take advantage of the hard market opportunities created by attractive rates.

Elsewhere, US liability claims growth has been trending higher since around 2015. Swiss Re says the current period of social inflation relates to single-claimant cases rather than mass tort and is not caused by legislative changes.

The uncertainty about liability reserves and pricing new business is seen as having a particular effect on excess liability and liability reinsurance treaties.

There is also property-insurance-related social inflation, Swiss Re highlights, particularly in connection with the assignment of benefits in Florida, which is driving up homeowners’ attritional claims costs.

The impact of low investment returns on re/insurer earnings is a further factor pushing up re/insurance rates.

Aon’s January 2021 reinsurance market outlook reported that investment returns were lower at all reinsurers in its analysis.

Even after rises in the first quarter this year, interest rates and consequently investment returns remain low by historic standards, placing more focus on underwriting profitability to make up for the lost investment income.

Meanwhile, as Swiss Re points out, macro risks are elevated, with an increasing focus on rising inflation and interest rate scenarios, which can trigger adverse reserves development and losses in asset valuations.

And lastly, reinsurance capacity provided by third-party capital is highlighted as an important contributor to property cat lines of business.

A reduction in capacity in collateralised reinsurance, which has suffered poor returns in recent years, is said to be contributing to selective tightening in the retrocession market and is also a factor in rate hardening in the reinsurance market.