The impact of recent hurricanes in the third-quarter of 2017 on parts of the U.S. brings the country’s protection gap into focus, with greater insurance penetration required for what’s considered the most developed market in the world.

Hurricanes Harvey and Irma brought intense and damaging levels of rainfall, flooding and surge to parts of Texas and Florida, respectively, and despite discussions about closing the protection gap (disparity between economic and insured losses post-event) being at the forefront of risk transfer debates, analysis by JLT Re reveals that when considering U.S. hurricane risk, the gap is actually expanding. 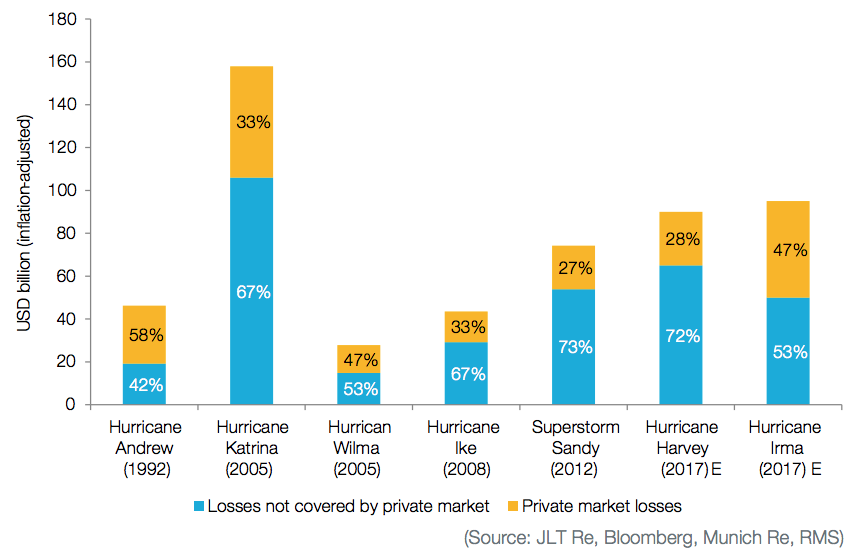 As shown by the above chart, provided by JLT Re, the reinsurance arm of global broker JLT Group, the protection gap for U.S. hurricane risk appears to be growing, with the expectation that an estimated 28% of Harvey losses will fall to the private market, compared with 58% of the loss from hurricane Andrew in 1992, for example.

As highlighted by JLT Re in its latest Viewpoint report, winds of change, the majority of the protection gap in the U.S. is related to flood losses, owing to a lack of solutions available in the private market to protect against U.S. flood and surge risks.

The U.S. government’s National Flood Insurance Program (NFIP) is the main carrier for flood protection in the U.S., but even before Harvey hit Texas, the NFIP was in substantial debt.

Estimates state that Harvey residential flood losses could reach as much as $37 billion, with around $11 billion assumed to be covered by the NFIP, and a very small portion falling to private insurers and reinsurers.

The NFIP announced the purchase of a $1.024 billion reinsurance program at the January 2017 renewals, which could payout in full on the losses from Harvey alone, underlining the importance of risk transfer for the NFIP and FEMA.

“There is clearly scope for the private market to take on a greater proportion of US flood risk than it does presently. At a minimum, this could take the form of an extended reinsurance programme,” says JLT Re.

However, given the NFIP’s huge debt, which pre-Harvey was just under $25 billion, the reinsurance broker suggests “more radical solutions could ensue,” with Congress set to debate the renewal of the NFIP this year, which is set to expire in December.

“Either way, increased participation in the US flood market by (re)insurers represents a significant opportunity for the sector as it will enable it to deploy some of the excess capital in the market. And this applies globally, with the protection gap continuing to widen in many parts of the world,” says JLT Re.

Typically, discussions surrounding the protection gap focus on emerging markets and regions of the world, where insurance penetration is virtually non-existent despite high vulnerability to a range of perils.

However, recent events highlight that protection gaps exist in all parts of the world, underlining the challenge and opportunity for insurers and reinsurers to develop innovative, effective, and affordable solutions that help to close the gap in both developed and emerging markets.